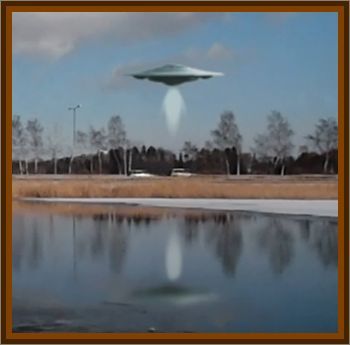 A series of New Jersey police sightings after a reported disk landing in a reservoir, important because police and several newspapers openly rejected an attempted hoax explanation.

The action began at At 5:00 p.m., on September 15., when two shiny disks were seen over Oradell, NJ, at 6:00 p.m., two shiny round UFOs were sighted by former Navy flying officer J.J. McVickers, just across the state line. At 7:50 p.m., NICAP member Victor Cipolla saw a glowing object descend toward Oradell, and other witnesses saw it dart back and forth near the reservoir. Five minutes later, 3 teenaged boys saw a bright oval shaped object land in the reservoir, with a loud splash. A man working nearby also heard the splash, according to police. After a moment, the strange device took off, climbed silently at high speed.

As McGuire AFB began an investigation, new reports came in. On September 21, four Hawthorne police officers watched a device with two beams like headlights hover over a quarry. Officer George Jediny, in a report to NICAP, said the UFO, which he sketched as a disk, seemed to revolve. The quarry night watchman, Wm. Stocks, said the UFO had also appeared the night before. When he drove a Jeep nearer to check up, the object maneuvered to keep out of the headlights.

Just after midnight, September 24, the same or a similar device was seen over the quarry by over a dozen Hawthorne police officers and the chief reporter of the NJ State Press, George Della Penta. When a police car spotlight was pointed up at the UFO, it began to move. Before it left, Mr. Della Penta shot 18' of color film.

Later, Oradell police received a letter signed: The Bergenfield Pranksters, purporting to be from some boys who said they faked the sightings with aluminum coated model aircraft supported by helium balloons. This was promptly rejected by the police and newspapers that checked the facts, among them:

The Newark Evening News, Science Writer Philip Del Vecchio: It would have been impossible for them, The Bergenfield Pranksters, to put their model planes so high that they could be seen in Hawthorne, no object such as they could have put together could have moved at the lightning speeds attributed to the UFO. The light, could not have been produced by amateurs. This newspaper makes an appeal to other residents, with the assurance that reports will be treated with dignity.

The Hawthorne Observer: rebuking those who accepted an unsigned letter from a town miles away, said it was time to treat the reports seriously.

The Riverdale Sunday Trend: Suppose the real hoax is the letter purporting to explain the whole thing?

The Hawthorne News Record: To imply so flippantly that our police officers spent almost half an hour looking at a balloon and then watched it speed away at an incredible rate, all in quite an opposite direction from Oradell, is insulting.

The Newark Sunday News: Flying saucers are still a big mystery, are seen with great regularity by sane and logical inhabitants of the planet Earth. What they are and where they come from and what their mission is has not yet been satisfactorily explained.