Not Such A Skeptic Anymore 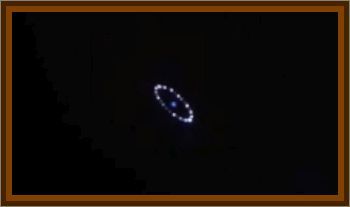 Newark schoolmaster Bernard Doy has always been sceptical about tales of flying saucers. But he says he saw one while driving through Wellow, near Ollerton, on Saturday night.

It was shaped like a child’s humming top, with an elliptical top and pointed base, and spun in the air for over 40 minutes before disappearing in the clouds.

I realize that there are cranks who believe that flying saucers carry other beings who are trying to communicate with the earth, said Mr Doy.

This experience has made me wonder whether they may be partly correct about the flying saucers.

Mr. Doy, who teaches art at the Sconce Hill Secondary School and lives in Parklands, said the object was sighted several thousand feet away. It was stationary while we watched the object, though it did spin on its axis from one side to an upright position. It was surrounded by a very bright light, he said.

The very fact that it was surrounded with light, not merely on one side, convinces me that it could not be a weather balloon.

Mr. Doy’s strange experience occurred while driving with his wife and two friends through Wellow at about 9:10 p.m. on Saturday evening.

Mr. Doy’s party viewed the strange object and fetched the police constable at Wellow Park to confirm their sighting. He in turn notified his superior officer, Insp. R. Street.

I had a look at the thing and I wouldn’t like to even guess at its identity. Inquiries made by Insp. Street have so far proved negative and the identity of the flying saucer remains a mystery.

We have no idea what the object could have been. It was probably not a meteorological balloon.

On August 9, Mr. Blythe received the following letter from a Mr. Robinson of Newark, Notts:

On Monday evening, August 7, 1967, at approximately 10:25 p.m., my girl friend and me had the experience of seeing what we believe to be a space craft. The occurrence happened at a place called Stapleford Woods, about 3 miles from Newark, near a village called Coddington. We drove into the woods earlier in the evening and pulled just off the road into a small clearing facing a track which ran at the side of part of the forest and adjacent to a small dike. On the other side of the dike is a field which had just been cleared of trees. At about 10:15 p.m. my girl said what are those lights in front of us?, and about ½< mile away we could see 2, round or slightly oval shaped lights, not beams of light, but just like 2 pieces of white or yellow colored paper, at this distance they seemed to be about 6" in diameter, and close together.

Obviously they were actually bigger because of the distance away. We watched the lights and after about a minute they disappeared and were replaced by a flashing red light which moved away to our right, climbing until it was above the trees.

I thought and suggested it was a helicopter, but thought it strange as I couldn’t hear any sound, and there was no wind anyway. The red light faded away. About 5 minutes. Later my girl friend said look the 2 lights again, they were on our right coming towards us above a line of trees about ¼> mile away, they stopped and hovered for about 2 minutes. Curious because of the absence of sound I started the car and drove slowly towards the lights. The road had a bend where I lost sight of the lights but on coming to the spot I thought they were I flashed my headlights. And 60' away a craft came over the trees towards us.

Astonished I stopped the car engine, still no sound, and watched the craft until it was about 20' away, it was about 20' high from the road. We saw the curved top and bottom, 3 squareish windows showing orange light, and on each side a brilliant beam of light shone downwards.

Suddenly I got frightened as it came right up to us so I started the engine and shot away. I contacted Mr. Doy of Newark as I didn’t know who to tell, as I thought the police would think we were nuts and he gave me your address,

Hoping this may be of interest to you.

Mr. Blythe adds: “I have a paper cutting reporting an object with 2 beams of light shining downwards, near some woods at Grantham, about 20 miles from above sighting, young couple in a car, no noise. July 1.