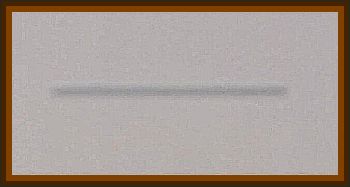 I was flying a powered para glider and saw what appeared to be an aircraft just not moving, about 500' above the trees.

So to make myself known I made some sharp turns so I could be seen for safety reasons.

After no change in the things position a few minutes went by and I started to approach the strange looking aircraft to get a better and closer look. It was about 5 miles away and the visibility was unlimited.

As I got closer to the object I noticed that it was a large cigar shaped craft with a fog around its hole thing. A dark band ran from the front to the back that was easy to now see. I now realized that I was seeing a flying saucer just not moving at all.

The sun was going down almost to the trees and the object was in the blind spot of the Birmingham airport control tower. After looking at my sectional map later that night at home, no way they could see the craft with the naked eye because the object would be between the tower and the bright sun.

And the craft could not see me because of the sun was to my back. the craft was between the tower and me. with the sun to my back, I was also in the blind spot of the craft.