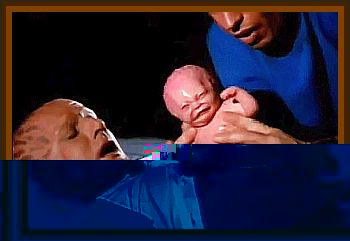 Today must be my day for finding strange stories, this the second one today. The wife and I were watching some UFO program on TV, not sure which one because there are many on... Some more believable than others.

This one is about fetal abduction, the persons wife was pregnant, she had a bad dream, woke up no longer pregnant.

Scouring the internet, this is what we have so far: Las Vegas, Nevada. 1987. In the middle of the night, Bret Oldham and his girlfriend Dhyanne Swanson are awakened by a loud bang. The couple, who are expecting their first child, are shocked to see a number of what look like Grey aliens surrounding their bed.

Before we even had time to react to seeing the Greys in the room, we were gone. They took us aboard the craft. They placed me on the table. And placed her to my right. And they had her in a position much like women do when they get an exam from the gynecologist.

I realized immediately what was happening:

They were taking the fetus.

Dhyanne Swanson, Bret's girlfriend and mother to the fetus, stated:

I couldn’t move. I couldn’t move my head. I couldn’t move anything. I could move my eyes to see, you know, where he was at. And I could hear him screaming. That’s when I realized they were doing something to me. I remember just calling, just saying:

According to Dhyanne’s account, the next morning she refused to believe the incident was more than just a terrible nightmare. But after finding traces of blood in her bed, she feared a miscarriage, and the couple went to see her doctor. When examined, Dhyanne was found to have no tissue remaining in her womb as if the fetus had been surgically removed.

I’ve never seen anything like this before. It was like this woman was never pregnant. I went in to clean the womb and the womb was already cleaned.

Dhyanne had been nearly 4 months pregnant at the time of this incident.

If you’re referring to a case where we have ultrasonographic evidence that the fetus was present and then sometime later, there’s no more fetus, I would think that strange. What you have here is a ultrasonographic image of a human fetus at about 3 months of gestation. If you measure the what we call crown to rump length, which is the longest distance from the head to the butt, that’s about 2", so that’s roughly the size or the diameter of a baseball. Could the body absorb this fetus overnight? That’s very unlikely.

How could the unborn child just disappear completely, without a trace? Is it possible that what Bret and Dhyanne experienced the previous night really was more than just a bizarre dream? Most of the time we would explain that by saying that the patient had a miscarriage. But in the event that there’s not much bleeding and there’s not much passage of tissue and yet the embryo is gone, I couldn’t explain that.

We were both kind of stunned when we left the hospital that night and it took a while for us to start talking about if we remembered the same things.

3 years later, Bret Oldham claims he was once again visited and taken by Grey aliens.

There seems to be a good deal of relatively consistent evidence on the part of both male and female abductees that there’s some interest in our reproductive process. There is also some evidence that abductees have been put in contact on spaceships with hybrid children, who seem to have some human characteristics, and some characteristics that aren’t quite human.

Might the stories of reunions with hybrid babies be not fantasy, but a conditioning process to prepare us for the day when the alien agenda is finally revealed? But if we are being subtly and strategically altered, where will it ultimately lead?

“It would seem that extraterrestrials have been coming to Earth for quite a long time and having sexual relationships with humans. And the reason for this would be to manipulate our DNA, making us into the more refined race that we are today. And we still have a certain evolution to go.

Is there another very heinous thing behind all of this? And that is:

Let’s wipe out the earthlings and put in this new breed that we can control.

In my personal view, we’re seeing extraterrestrials interbreeding with humans as part of a long term interfamilial exchange. The human family goes far beyond life on Earth. Extraterrestrial humans may be coming here to replenish their genetic supply. It may literally be a question of life and death for them.