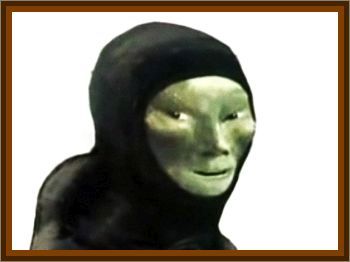 My name is Mrs. E. Loznaya. In 1936, when I was 15, I was living in the Oktyabriskiy sovkhoz in Kazakhstan. At the time I had never heard of UFOs and did not even know of the existence of science fiction books and magazines.

In the winter, every morning I went to school by a lonely country road. On that particular day, it was already light although the sun had not yet risen. The weather was fine and it was freezing. Suddenly I caught sight of a dark point moving rapidly in the sky to my left. It came closer, grew larger, and in a matter of seconds I saw a man like figure dressed in black and seen in profile.

This figure was, to my mind, of medium height, his black clothes covered him completely, like overalls. I could clearly see his head, or more exactly, something like a helmet, and enormous square arms tightly fixed to his body. I could see behind his back an oval thing something like a rucksack. Looking with fright at the flying man, I noticed suddenly that he had changed his course and was now flying towards me.

When he turned I saw his right arm was slightly bent at the elbow. Now I saw him full face, but could not discern any features because, in place of a face there was just an entirely black surface.

At that instant I heard an increasing rumble as if it was a flying mechanism and not a living being. By now the distance between us had shortened to about 120'. I was terrified and tried to look for somewhere to hide, but there was none on the snow covered steppe. I then turned again towards the flying man and saw nobody.

Nothing unusual was to be seen.

Maybe he had made a sudden change in his course or maybe he had dived into a snow bank, but the next minute I was running towards my home.

This sighting only lasted a minute but I have remembered every detail clearly all these years.