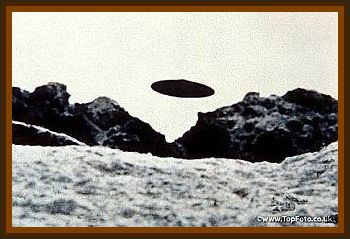 I relay this data as to indicate how the United States Air Force is involved in disk craft.

The year was 1976 in Okinawa Japan. Some friends and I were playing glow in the dark football. We heard a whirring sound and looked up and saw a 8' white disk object with United States Air Force written on the bottom of it and it was flying about 100' in the sky.

It flew over us and then hovered over some trees. The disk had a single red light on the bottom, directly in the center of the disk. It flashed like any standard aircraft light.

It then ejected a small parachute. We all ran over to see what it had ejected and it was merely a small weight attached to a small white parachute.

It then flew off into the night. It was an unmanned object with no windows and appeared to be remotely controlled.

The words: United States Air Force were clearly seen on the bottom of the craft.

The whirring sound was very quiet and no sign of external engines or propellers were seen. The thickness of the craft was about 3' with a diameter of 8'.

The structure was seamless and was white in color. There was no glow or strange light from the craft.

This was exactly as we all remember it.