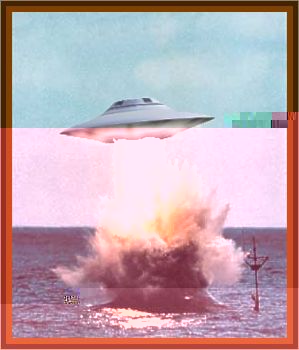 Although the incident occurred in 1952, it did not come to light until recently when it was reported by two of the original witnesses, Stewart S. of Ladysmith, BC, and his cousin by marriage, Dorothy S. Another witness was Dorothys late husband.

We were living at Summerland on Lake Okanagan at the time, and Dorothy & Gordon had just arrived from Vancouver to visit us for a while, Stewart said. As it was her first trip to the Okanagan since leaving her home in England, we had set out on a motor trip for the day to see some of the country. It was a clear bright morning in September, and when we reached the ferry slip to cross over to Kelowna, we realized we would have to wait a bit because we could see the ferry still on the other side. And then about a ½ mile north of the ferry we noticed this other thing.

I remember pointing it out and saying what a beautiful white boat it was, Dorothy added. It was moving around so gracefully, and though we still couldn't make it out very well at that distance, it seemed to have a smooth round design we had never seen before.

As the 3 watched from their car in admiring curiosity, they noticed the strange craft had started to move across the lake in their direction. By that time cars for the ferry were beginning to line up behind them, so they were also in a position to observe what happened next.

We could see the wash coming out from either side, yet somehow the boat, as we thought it was, didn't seem to be moving very fast, Dorothy compared it to a line from Dante, Hasten slowly. As it came closer we still thought it must be some unusual kind of modern boat. It looked like a round hard hat sitting on a platter. But there was something about that wash that looked different and that started us wondering. Although neither could explain precisely what the difference was, possibly it was caused by the circular shape of the craft moving lightly on the surface, like a flatly thrown stone.

Then it really surprised us, It was a few hundred yards away when all at once the wake disappeared and we realized the thing was in the air. It changed direction to the right so that it came straight toward the ferry dock and then it stopped dead, less than 100' in front of us and about 50' above the water.

Despite the years that had since elapsed, Stewarts memory of that experience was obviously still very much with him. He shook his head in amazement as he spoke of it and seemed to live the whole experience over again. Dorothy, on the other hand, said she had not thought of it for a long while, though she was sufficiently impressed at the time to make a note of it in her diary. We sat in the car spellbound, We couldn't believe what was happening and afterwards, for some reason, we had no desire to talk about it. It was as if we had been told not to.

Both described the object as about 30' in diameter and having a haziness which made the outline indistinct. Also it had a translucent quality which gave them the impression that anyone inside could have seen them without being seen in return. A description of translucence often occurs in sighting reports in which the UFO is dome shaped, such as this one.

It stayed there, absolutely silent, for a minute or so, and we definitely had a feeling it was watching us, Stewart added. Then it started back across the lake. By this time I was out of the car to get a better look and I told the others I wished I had a pair of binoculars. An American in the car behind heard me and said, Here take mine. I've seen enough. He looked as if it had scared him.

Through the binoculars Stewart watched the object reach the opposite shore, just over 2 miles away, in 5 or 6 minutes, giving it a leisurely speed of about 20 mph. Then it seemed to fly parallel to a trail bordering the lake before it shot up and disappeared. After a moment Stewart handed the binoculars back to their owner, and he remembers how they stared silently at each other in disbelief. I guess I looked just as shocked as he did, and it must have affected the others the same way. We were a pretty quiet bunch going across on the ferry. Having seen and been examined by craft that may have come from a world light years away, it was no wonder.