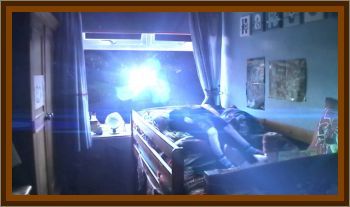 In 1988 our family lived in a small apartment in a town in Auglaize County, Ohio. I don't want to give the location or our name. At the time, I was 11 years old and my 10 month old sister and I shared a bedroom. One night while we were asleep, I heard a constant droning sound coming from outside our window. It continued for several minutes, then eventually stopped. A few nights later the same sound started. I looked at the clock and it read 3:24 a.m. This time, the sound continued for many minutes. I got out of bed and looked out the window. I notice a small bright white light high in the sky that seemed to pulse. I watched the light for a few minutes. It never moved except for the pulsing. Then it disappeared and the droning sound stopped.

The next morning I told my mother about the sound and the light. She said that she hadn't notice anything.

A couple of nights later, I was getting ready for bed. My sister was already asleep in her crib. I walked into the bedroom and noticed a weird odor. It reminded me of antiseptic cleaner. I looked toward my sister's crib and it was empty. I had been in the bathroom previously, so I thought my mother had taken my sister to my parent's bedroom.

I laid on my bed reading a magazine with the radio very low. After awhile, I looked at the clock. It was 10:20 p.m.

I figured that my mother fell asleep and my sister would sleep with her. My father worked night shift, so occasionally my sister stayed the night with my mother. I was getting sleepy, so I turned the light off and laid down.

At some point, I was startled by a weird dream. I remember being frozen and not being able to move. I suddenly woke and opened my eyes. I felt very cold even though it was July and we didn't have air conditioning at the time. The droning sound had started again. I tried to get out of bed but was unable to do so. I felt very weak and disoriented. The droning sound was getting much louder and I was beginning to get a headache. I tried to call out to my mother but no sound came out of my mouth. Then the bedroom started to fill up with white light. It was brightest above my sister's crib. As the light intensified I noticed something coming through the wall. As I watched, the form became visible. It was my sister floating above the crib in a prone position. She had come through the light and through the wall. Her body slowly descended into the crib and the light, as well as the droning sound, began to diminish. I regained all of my faculties. I jumped out of bed and went over to my sister. She was asleep and seemed fine. I stood there by the crib and watched her while thinking if should tell my mother what I witnessed. I decided that this would be my secret.

Not long after that, we moved to a larger apartment. My sister and I both had our own rooms.

Now to the present.

Last week my sister and I got together at her home in Michigan. She has her own family and 2 great kids. As we sat in her living room talking, she started to tell me about something her 5 year old daughter told her. It seems that her daughter had an experience very similar to my sister's incident when she was 10 months old. I detailed to her what had happened to her. She looked at me and mentioned that she thought that she had experienced several abductions and that she had an odd encounter a few years back that involved a strange being that confronted her in her bedroom. She had no further recollection beyond that.