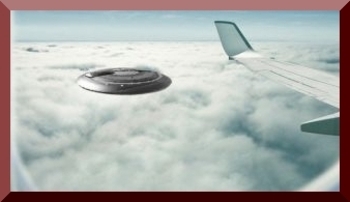 I have debated for years whether to report this or not and have decided to file this report because the incidents, I feel, are related.

I am not exactly sure of the exact time for incident one, but it was a full moon, I had my 1957 chevy and have determined it must have been during the June, July, or August 1965 time period.

Incident two happened about July or August 1985 or 1986 because our son was born in 1973 and he was about 13 when this incident occurred.

Around summertime, 9:00 p.m.’ish, 1965 my then girlfriend, now wife, and I were sitting on the back of my 1957 chevy listening to music and looking up at the sky, near downtown Ogden, UT.

It was a beautiful moonlit night. Hill Air Force Base, HAFB, is just South of us about 10 miles and we were watching the airplanes flying out from HAFB and over us. I believe it was a C-119 flying box car that was flying North from HAFB when we noticed a round circular object flying right on its tail following it North towards Brigham City.

It had 3 colored lights around its circular perimeter. We watched it for a few minutes as they both flew North. The UFO abruptly shot right, East, nstantly over the mountains East of Ogden and flew South across the peaks of the mountain range.

We were pretty excited so my girlfriend and her 2 little brothers and I jumped in the car and headed South towards Weber Canyon couple miles to see if we could see it again. We didn’t, so I turned around and headed back towards her house.

After a couple of minutes her brothers, around 10 and 13 years old, kept yelling:

I finally stopped and jumped out of the car and the UFO was flying slowly North again in and out of the canyons along the mountain side near the top of the peaks. This range is between Ogden Canyon to the North and Weber Canyon to the South with Mt. Ogden peak near the middle. The Snow Basin Ski Resort is on the East side of Mt. Ogden.

I watched it a few minutes as it slowly flew North, we then headed back to her house near 30th street and Ogden Avenue which was only a few more blocks than where we stopped. When we got there and out of the car again the UFO was still moving slowing along the top of the peaks in and out of the canyons.

There are a fair number of small canyons and ridges between Ogden and Weber Canyons. Suddenly the UFO stopped just above the mountain and hovered very near an area known as Hidden Valley which is North of Mt. Ogden and South of Ogden Canyon and near the top of that part of the mountain.

This area is just North of the Snow Basin Ski Resort.

The UFO’s lights went off, the silver object was still hovering there and slowly descended onto the top of the mountain above Hidden Valley finally ending just out of view. Due to the moonlight, the UFO was clearly visible and perfectly round.

The Hidden Valley trail starts at about 22nd street and East of Ogden, is about 2½ miles with a vertical ascent of about 2,200' above the valley floor. Mt. Ogden’s elevation is 9,570'.

Soon after it disappeared from view, a bright yellow light slowly flashed on and off out of the exact area the UFO had either disappeared or landed on the top the mountain. We watched until nearly 2:00 a.m. The flashing was repeated slowly as on for a second then off for a while like a minute or more.

My girlfriend’s mother and several neighbors plus she and I and her brothers watched this light flash for a long time. We all watched it also descend into that area of the mountain.

Finally, I called our local popular radio station which at that time was KLO radio. I’m guessing I called him around 11:00 o’clock or so. He promptly ridiculed me and made fun of me pretty harshly then told me he didn’t want to hear about and hung up on me.

Within a few minutes a small airplane flew out of Ogden airport just East of us a few miles and flew directly towards that same area of the mountain and made one circle around the area where that light had flashed and returned directly to the airport.

I then believed others must have seen the UFO as well, otherwise an airplane wouldn’t have flown out there and straight back.

Being 17 years old, I was pretty irritated at the KLO announcer’s attitude towards me so a drove out to the KLO radio station at about 2:00 a.m.

The KLO towers and station were towards Hooper, UT and South of Roy, UT about 3 or 4 miles from downtown Ogden. In those days, it was all pasture/farmland with nothing around.

It was usually pitch black out that way at night. I ultimately talked to the radio announcer for a long time, he was signing off about the time I got there. He told me he had about 30 calls about the same UFO/object and flashing light with many of them describing exactly what we saw. He also told me he was out there by himself and didn’t want to hear about UFOs, he also related a few stories of his on that happened to him out there.

This happened about July or August 1985 or 1986. I was the Boy Scout leader, my girlfriend mentioned in the incident above and I were married in 1968 and we had 4 children by this time.

My son was born 1973 and must have been about 13. I had taken the Boy Scouts on a small backpack trip up to the Hidden Valley area described in incident above. I had always wanted to hike up there since then.

It was really hot and we left later in the afternoon. We parked at a gravel parking lot on 22nd street, East side of Ogden by the canal and began hiking up the trail which went along the face of the mountain, up through the cliffs, up a small canyon finally ending at the Hidden Valley area.

We pitched our tents, ate some dinner over a fire and by this time it was dark. I told the boys a few scary stories and we went to bed. I slept outside by the fire, the boys all had their own tents.

I just remember sitting up a bit and looking up at the light which would have been roughly a 40° angle or so to the top where the light originated.

It must have been roughly a mile or so distance to the top of the mountain where the light was shining from. There is a relatively flat area up there, I have hunted deer in that area. There are no roads and no way to access it except as a strenuous hike from either side of the mountain.

This was the same exact area where the UFO in the above incident was described had descended and apparently landed.

I watched the bright light for a while but do not remember anything beyond that, don’t remember if it went out or I just went back to sleep. I have never asked the boys who were with me if they remember the light or not. I’ve always thought that night was very odd and about how bright the light was that was illuminating us.

I have often wondered about these incidents and if they are related. Seems peculiar that they wouldn’t be related since there is absolutely no access to that area.

I have researched some UFO historical data but have never found any reports describing the actions of the UFO during that time frame. One similar in 1967 East of Salt Lake City but none in the Ogden area.