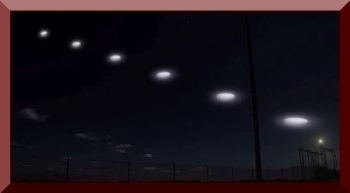 The sighting occured in 1956 and took place at about 3:30 p.m. as I was on my way to work. I was working at the Ogallala, Nebraska Power Plant as a Steam Turbine Operator. It was in the summer as it was quite warm and the sun was still high in the sky. As I approached the railroad crossing I looked both East and West to be sure there were no trains coming and it was a uncontrolled crossing and I look both ways whether it is controlled or not. Any way as I looked West I saw an object sitting directly on the tracks at a distance that I would say was one half a mile.

I gasped in amazement as I immediately knew I was looking at a so called flying saucer. I continued on across the track and pulled over to the right and out of the right away so I would not be impeding traffic. The old car I was driving had running boards and I opened the door and stood on the running board for a better look.

What I saw was a metallic object that I would judge was 75' to 80' accross and shaped like two saucers with one sitting atop the other in an inverted position. The object was near silver in color and as I looked it seemed to be stationary then a sort of reflective light as bright as the sun flashed on the edge towards me and it seemed to start to rotate and picked up tremendous speed and raised a few feet above the rails. At that time a friend of mine that was employed by Goodall Mfg. plant just across the street from me came out of the building and started across the street to his car and I called him over and pointed to the West. He looked in the direction I was pointing and stood speechless when he observed what I was seeing. Other people were coming out of the Goodall plant but we were so engrossed with what we were looking at that we said nothing to them but just stood and watched. The object raised to an elevation of probably 100' or so, and the sort of dipped itself downward with its leading edge and I could see what appeared to be a path of light around it near its center and then the thing tipped up to a near level position or slightly upward and sped off to the North East at an ever increasing rate of speed and an angle of probably a 40° elevation as it moved and was gone from sight in a matter of no more than one half a minute.

It left no visible trail of condensation or other sort of indication of its travel.

Dick said I can't beleive it and I said the same and that I sure as hell dident intend to report it as I would be laughed out of the town and maby even sent to the looney bin. He agreed and we both remained silent about the incident. I have related this to some people over the years but never made an official report on it. I served in the Army Air Force during and after WWII and was stationed at White Sands Proving Grounds after the War and the Air Force was part of Project Blue Book at that time but during my military service I never experienced any thing of that nature. I had served as a Bomber crew member overseas and was assisting in the V-2 program at White Sands in 1947,

The above report to you is as near as I can recall about the sighting in 1955 and as I was trained very well as an observer in the Air Force and didn't receive any section 8 from the service. I think my report can be considered reliable.