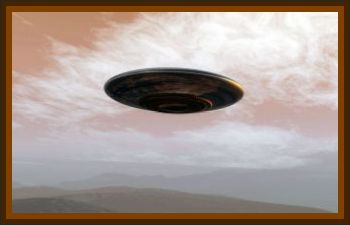 They had just crossed a bridge over a canal when Mr. Guseman saw 2 lights near the road ahead and to their left. The left light was green and the one on the right red. Then two bright white lights came on between the colored ones. Thinking they were landing lights, Guseman said to his wife:

Look at the crazy plane trying to land.

As the couple drew nearer, they could see the lights were stationary and attached to a large and unfamiliar object. Only the white lights were visible as they came up opposite to the object, across the highway from them. It sat motionless just over the trees approximately 200' from them at an altitude of about 70' or 80'.

Mr. Guseman rolled down his left window and he and his wife studied the object more closely. It was disk shaped with a kind of cupola under the main body. Its width was estimated at about 50' and its height at about 20' at the thickest point.

Except for the top, the object was clearly visible, a dark gray silhouette against the lighter sky.

The surface was smooth and the bright white lights appeared to be searchlights affixed to the front end. The beams of these lights were wider at the ends than at the source and only the source of the closer beam was visible, the other being hidden by the body of the object.

The rather squared cupola, or gondola, contained a horizontal row of windows which gave forth a faint soft light, steady and uninterrupted by any forms or movement. The light was described as yellowish by Mr. Guseman, pinkish by his wife.

On the bottom of this gondola, in the center, were 3 red lights that shone with an even intensity.

For about 2 minutes the couple watched the object as it hovered motionlessly. Several cars and trucks passed on the highway, but none slowed down or appeared to take notice.

Then the 2 forward beams of light began to swing upward until they were pointed at a 45° angle from horizontal, shining upwards and out into the night sky. As soon as they reached this new position, the object began moving in a forward direction toward the North, and to the left of the witnesses.

As it moved, the Gusemans heard a soft hum or buzz, similar to the sound of an electric motor.

The UFO proceeded in a slow, straight trajectory at an even altitude and as it changed its angle of perspective relative to the viewers position, it presented the same circular, disk shape with the undercarriage and windows below.

After moving approximately 200' or 300' to the North over the trees, the UFO seemed literally to disappear. They assumed it had dropped down into a field beyond the tree line, but when they drove near the field to check further they saw nothing, nor could they find any evidence on the ground where the UFO had hovered when they searched it with a flashlight.

Guseman, 29 at the time of the sighting, is president of the Delmarva Contracting Company, Middletown, his wife is a business administrator in Wilmington Memorial Hospital

Their sighting was investigated by NICAP and they were later questioned further at NICAP headquarters by Dr. James E. McDonald.

The witnesses were articulate, unemotional, and cooperative in both their interviews.