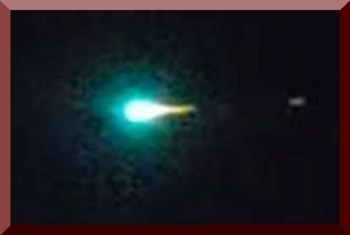 I shall always remember March 17, 1969, in Odessa, WA. It was my older sister's 14th Birthday party. I was almost 13. Besides our family of five, my sister had 4 friends over & our parents had invited a young family of three & the mother-in-law, who had just arrived here a few weeks prior from Germany, not speaking a stitch of English.

We had finished dinner and were just singing Happy Birthday with the cake, when our phone rang. A neighbor across the street & up the block to the east of us called & said: Step out on your porch NOW you won’t believe what you see!. The entire group ran out to the front yard and what we saw was totally unexpected. We stood stunned and in awe all at once.

Hovering over the callers home, actually 3 homes by size, was a disk shaped craft which had a glow about it. It was a brilliant metallic unseen before by any of us, adults and children alike. It was near silent, just a hum almost like electrical lines make. It was seamless and at the bottom was a circle of lights which to my recollection these 46 yrs. later were blue and red.

It just hovered in place for at least 5 minutes. Dad yelled out: I’m going to follow this thing if it moves, who wants to come?! Dad, the male family friend, my younger sister, three of the girls at the party and me jumped in to the old Dodge Dart.

Just as dad started the engine the craft began to move south, but still hovering actually slowly. We followed from our home on 2nd Ave, went right, south, toward the hospital and followed that road through the parking lot then going right again & facing west and taking a left turn at the end of that block. This took us up a slight hill which came to the next street which we took a right on. We parked on the road there. Directly south of where we parked in a then vacant lot we actually saw the craft land or appear to land, it may have just been hovering very low. Dad turned off the car and we all ran out toward the craft. Right before our very eyes, it disappeared. It did not fly off with great speed as so many reports speak of. It was just plain gone.

Within this same week we learned that another family in town saw the same craft. I don’t know if it was the same night but they claim it did land in an alfalfa field just outside their family home which I believe was west of Odessa near the cemetery. The woman was an artist who painted what they saw. They also claimed that there were burn marks in a circular shape left in the alfalfa field. She is still living in Odessa.

Gone now from the folks who witnessed the craft hovering over the homes in our neighborhood are my dad, the young man who called that night & his parents, & the German lady. All the rest are still living and could easily witness this account for me. I don’t know how many others in the neighborhood were called that night.