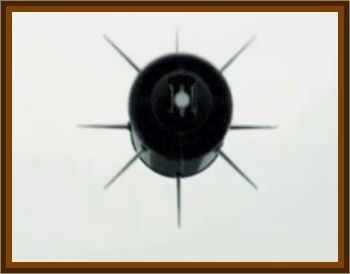 and two fliers from Charleston, SC, one a Air Force jet pilot, observed a strange round object.

All five men where aboard Veeder's boat, the Sports Fisherman. The object seen first in the SE, approached the boat at high speed. As observed by Veeder and the others, through binoculars, the UFO appeared to be a sphere with sensing elements or spikes protruding from it. The tips of the spikes were red.

The object hovered for about two minutes then took off to the SW at a speed greater than any object the witnesses had ever encountered.

The sighting was reported to Otis AFB, MA. Project Blue Book evaluated this sighting as a balloon.

Nine copies of the Navy report were sent to the CIA. Two were sent to the Bureau of Aeronautics, which has air technical intelligence assets in its office. Yes, trained observers can make mistakes, however some of these are entrusted with expensive aircraft to they go out and make identification of possible hostile intrusions. If a radar target were involved, wouldn't it be picked up on someone's radar in the area? What is the origin, of the hypothetical balloon with radar target?