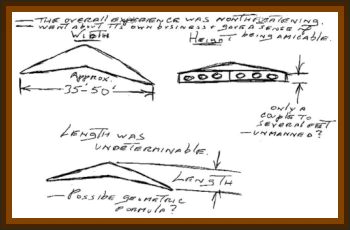 I was going for a walk at Fairfield Village in Ocala, at approximately 9:00 p.m.

I was looking at the stars, in particular, Orien, when there was a abrupt rushing sound as I saw what looked like a V shaped wing pass about 50' above a tree, descending, and banking on about a 60° angle.

I ran towards the tree to get a better view of the wing as it receded into the dark. After the rushing sound, the wing made no sound. There were also no lights showing on the vehicle.

All I could see was the general V shape as it rocked or pitched its wingtips, banking from side to side.

At first I thought it was perhaps a flock of Canadian geese, but there was no flapping sound or honking, and besides, the shape moved as a solid piece. I could barely see the shape of a row of circular lights on the rear end of the wing, but they were not lit.

Mostly, I didn’t believe what I was seeing and ended up asking myself why someone would be hang gliding at 9:00 p.m.

All this time the wing made no sound as it moved less than 50' above the treeline. I gave up on trying to figure out what I saw and decided to continue with my walk.

Until now the wing must have backtracked because it was about 40' from where I was standing. It looked as if it was going to hit the trunk of a tree that was nearby, but then it poised only a few feet above the ground with it nose pointed to the tree. Then the nose of the wing turned 90° while rotating the axis of its wing so that the entire craft was on its side, perpendicular to the ground about 6' above the ground.

The wing then moved forward to clear the tree and then straightened itself out so that it returned to the wing being in a horizontal position or parallel to the ground. It was stationary in midair for a moment before disappearing, headed North, while flying close to the treeline, all the while banking and pitching along with the shapes of the trees.

The entire incident took place in just a few minutes in silence and involved traveling from South to North. The only sounds made were when the wing did its positioning, a whirring sound, and the sound of the air itself rushing over the wing. The craft, or whatever it’s called, gave the impression of a giant gliding sail or bird, like a pterodactyl, while flying. There was nothing threatening or frightening about the experience. This is the only time I’ve ever seen anything like it.

After the experience I went for a ride in my truck. The night was clear when I left, but low clouds rolled in by the time I got back. When I returned and turned on the left indicator, the seatbelt warning was beeping in unison with the indicator even though my belt was fastened. I looked at the dashboard and all the needles were moving erratically.