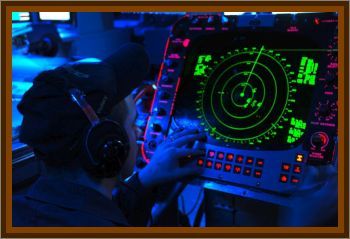 Pinecastle Electronic Warfare Range Tracking Station, a restricted facility operated by the U.S. Navy 32 miles east-southeast of Ocala, Florida in the north central part of the state, was the site of a puzzling, still unexplained UFO incident.

The incident began with a phone call from a civilian. At about 10:05 p.m., she called from nearby Silver Glen Springs to ask if the installation was shooting off flares. She had just seen something that looked like a flare.

The duty officer, SK-1 Robert Clark, assured her no such operation was going on at that moment. A second call came a few minutes later. A man, later identified as Rocky Morgan, said that he and seven other persons traveling on Highway 19 near Silver Glen Springs had just seen an oblong shaped flying object, some 50' to 60' in diameter and almost the color of the moon, pass over the top of his car. It had a flashing light which was intensely bright at its center.

Clark checked with the Jacksonville Air Route Traffic Control Center, which told him no aircraft were in the area. He and the base air controller, Gary Collison, climbed up an observation tower next to a van containing the base’s radar equipment.

Clark contacted external security and directed them to contact TD-2 Timothy Collins, a radar technician. Collins rushed to the tower. The personnel already there were watching a cluster of glowing lights off to the west-northwest. They were at eye level and seemed to be just above an old Civil Defense tower three miles away. Even though it was a clear, quiet night, the witnesses heard no noise emanating from the lights, which apparently were attached to a single object. After watching them through binoculars, Collins went down to warm up the track radar, which took five minutes, and the acquisition radar, which took 20 minutes. As he waited, he looked for the object with a periscope on the van and saw it again.

The object was located at 0.2° elevation, or just a hundred or so feet off the ground, at the assumed distance was treetop level, Collins would say. Its image on radar was as strong as, or stronger than the image of the tower. The object seemed to be the size of a jetliner.

Ten to 15 minutes later it abruptly vanished from both sight and radar. But at around 11:40 p.m., the same, or a similar object appeared 15° to the north. Collins located it visually, but the second, computer assisted radar did not track it for some reason. He also saw it through the periscope. A few minutes later it disappeared suddenly from both instrumented and visual observation.

Around midnight it, or another object, was seen three miles to the northwest. For five seconds it moved at more than 500 knots on a course, then accelerated for two seconds, and executed a hairpin turn in one second. When it made that turn, it was 15 miles south of the base, which meant it had covered 15 miles in seven seconds, most of that distance was covered in the last two seconds, a speed of 7,700 mph is required to cover this distance in that time.

The turn was a radical reversal of direction, now the UFO was shooting northward and toward the observers at the base. Its speed had slowed almost instantaneously to a mere two knots. It was at this point that Collins’ radar locked on to it. After a little more than a minute, the object vanished. The sighting was over.

A dozen or so personnel had seen the object or objects. One of them, TD-AA Carol Snyder, told a newspaper reporter:

We saw three very blurry lights: red, white, and green. We watched them for about 30 minutes. We couldn’t see how fast they were traveling. We were holding the binoculars, and the lights appeared to be bouncing.

The Navy conducted an investigation out of the Jacksonville center but came to no conclusions. Allan Hendry of the Center for UFO Studies interviewed several of the witnesses and gathered radar, meteorological, and astronomical data. He considered, then rejected, various conventional alternatives before declaring this a case of high merit.

I just wanted to Thank You for the article posted about this UFO sighting. I was the watch tower guard that night, and there are some facts that were not mentioned. Such as that Jacksonville NAS launched 2 aircraft to intercept. Once they were on our radar, the UFO vanished.

They had it locked into their radar as well. Our radar locked onto one of the UFOs. I have never seen a radar act so crazy. Spinning around and around, up and down.

I just wanted to add my 2 cents worth due to the fact that I saw the UFO first from the tower. I and airman K.C. woke the Petty Officer of the day, and drug him up the tower to see what we saw, before any calls were received.

That night we were told not to talk to anyone about this by the commanding officer. I have told this story to many of my friends and they all thought I was crazy. I am sure you can check Navy records to confirm I truly was there.