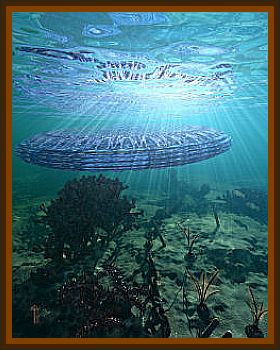 In the waters of Norway, and Sweden, too, there have been observations of unidentified submarine objects for a long time, going back before World War II.

In what follows we will take a look at this peculiar phenomenon and report sightings og objects coming up from or going down into lakes and rivers. This article is based on newspaper clippings and reports from the archives of UFO-Norway.

The Royal Norwegian department of Foreign Affairs has a certain number of documents pertaining to this subject, but these documents mostly concern identified foreign submarines. we have been given access to the documents only up to 1969, the ones from 1970 to the present are still classified.

The operational headquarters of the Royal Norwegian Navy, which takes these reports seriously, classifies them in 4 categories:

Certain U-boat: When it is clearly observed visually by competent personnel, unequivocally registered on electronic localizing equipment, or photographed.

Probable U-boat: When there is no reason to doubt it is a U-boat, but the requirements for a certain U-boat have not been met. 12 such reports are known from 1975 to 1989.

From 1969 to May 1983 the presence of unknown U-boats in norwegian territorial waters was reported on some 200 occasions. The observers thought they had seen a periscope, tower, or actual submarine. Several of the reports had geographic and time correlations. By correlating the approximately 200 reports, it is possible to reduce the actual number of objects to 175. Of these the Navy classified 75 – 42.8% as not U-boats. These are the sightings of greatest interest to ufologists.

Let us first go back in time to some early reports.

On Thursday, July 18, 1946, a ghost rocket crashed into Lake Mjøsa, in southeastern Norway. Between 12:00 p.m. and 12:30 p.m., several witnesses observed a V1 like object coming in low from the west, at about 150’ height. The witnesses first heard a strong whistling sound, not exactly like that associated with known aircraft. The object flew so low as to cause the trees to sway. It impacted in Lake Mkøsa, about a mile from the western shore and 4 miles from Minnesund, where the depth is 1000'. It was cigar shaped, about 10' long, with about 3' wings placed 3' behind the nose. The front and back parts were shining like metal, but the middle section including the wings was dark. The wings seemed to flap a little, as if made of fabric. No fire, exhaust, or light was seen.

When it hit the lake, the water splashed several feet into the air. There was no explosion. The sky was clear, and the water quickly calmed. Some winesses thought they saw 2 objects, one in front of the other. The Norwegian Defense High Command conducted an investigation, according to press reports of the period, but the documents have never been recovered. There is a distinct possibility that all documents on the 1946 ghost rocket wave have been destroyed. If so, this is a disaster for UFO historians, who will be left with only newspaper accounts as source material.

Shortly before 7:00 a.m. one Thursday in October 1952, Johannes Nordlien was waiting for coworkers when he suddenly heard a howling, jetlike sound. A moment later a saucer shaped object, 12' in diameter, came at high speed from the west and passed by him 300' away. It impacted with a violent splash in the river Lågen. The object was white as snow, and Nordlien clearly observed its flat and round shape as it hit the water. When his fellow workers showed up, the water was still boiling. The loud howling sound vanished as soon as he saw the object.

At 11:55 a.m. on Sunday, June 1, 1958, a silent unknown aircraft with no identifying markers crashed into the Alta fjord. At the impact site, 200' deep, a column of water rose up. The aircraft resembled a twin engine delta winged jet. The witnesses were Bjørn Taraldsen, Nils M. Turi, Kate Julsen, and Rasmus Hykkerud. When others arrived half an hour later, all they found were a number of dead fish. The frigate KNM Arendal and the submarine KNM Sarpen, along with divers, searched for the aircraft friutlessly for over a week. The Arendal, however, did get sonar reading of a mobile object.

At 10:00 p.m. just before Christmas 1959, Lorentz Johnsen saw a dark, silent object, which he described as looking like a small bus with a number of windows along its side, fly slowly by at an altitude of 500'. It was heading in the direction of the Namsen fjord. It descended to about 150', grew fiery red, then exploded with an ear splitting crash. According to Johnsen:

It looked like sort of a cover was torn off the object in one piece. This, along with a number of other things, fell into the water. I especially noticed 3 black columns, about 6' long and 18" in diameter. The cover itself was torn off in one piece and reminded med of a curved sheet of metal. This was fiery red at first but grew black before reaching the water.

Beetween November 12 and 22, 1972, an extensive search was conducted in the 4000' deep Sogne fjord. 30 Navy vessels, plus NATO forces, participated. The excitement began when the military received a report of a U-boat. The next day, the 13th, 2 witnesses watched an aircraft like object maneuver along the fjord.

The same night 4 other witnesses observed a bright object on the water. On November 20, at 1:00 p.m., a U-boat was seen near Kyrkjebø just as it headed away from Mårenlandet toward the fjord’s southern end. 15 minutes later it was seen by 5 police officers at Kvamsøy, a small island about 30 miles north of Kyrkjebø.

Here frigates dropped mines on the object. If these were 2 observations of the same object, we have a speed of 125 mph, a speed of which no known submarine is capable.

On the night of November 21, 4 witnesses sighted 4 rockets shooting up from the water at Hermansverk. The rockets were silent and resembled small red balls of light. On the afternoon of the next day, an antisubmarine missile was fired at the intruders. The water’s depth at the site was only 75', and the shock waves of the explosion were so powerful as to throw small boats onto land 6 miles away.

Any conventional submarine would have been severely damaged and forced to surface, yet this vessel escaped apparently unscatched.

When we first spotted the strange object, which had a speed of at least 60 mph along the water, Bakke reported, we at first thought it had to be some sort of speedboat, and we were amazed at people going that fast. But the object rose up at a 45° angle, and a moment later it was gone. Then my wife and I became aware of having witnessed a UFO up close. And it was a wonderful experience.

The object was entirely black and thus clearly visible.

Local divers spotted a submarine like tower in the Husnes fjord, a minor fjord in the Hardanger fjord, on Wednesday, April 27, 1983, and by 1:00 p.m. a search team from the Norwegian Defense was at the site. It consisted of the corvette KNM Sleipner, 2 submarines, and one Orion aircraft equipped with anti U-boat weapons. The next day the KNM Osloand & 2 more frigates joined the search. At 4:55 p.m. the Oslo achieved the first possible sonar contact south of Leivik on Stord Island. At 5:21 p.m. the frigate fired a Terne rocket as a warning to the intruders that they had been observed and were being pursued.

The following night a possible sonar contact ocurred in the Selbjørn fjord, another minor fjord in the Hardanger fjord, but the pursuers did not open fire out of concern for a nearby Norwegian submarine. 2 more sonar contacts took place at different positions, and on the afternoon of April 30, the Oslo, after sonar contact, fired a Terne rocket and dropped a mine. 5 minutes later it launched 4 more rockets, and then the sonar contact was lost. Around 4:00 p.m. 5 Terne rockets were fired at nearby Halsenøy. Near midnight a sonar contact south of Leirvik resulted in another rocket firing.

On May 1, a Sunday, at 4:20 p.m., after sonar contact, 6 Terne rockets were launched. They hit the water and plunged into the deep before the charge detonated. Immediately afterwards an Orion aircraft dropped a mine at the same spot in the Skåneviks fjord. An hour later the Oslo attacked again with 6 rockets. The last sonar contact was achieved by an Orion aircraft at 8:30 p.m. The plane dropped mines at the entrance to the Høylandssundet. The next night mines were dropped at the Selbj&oslahrn fjord.

All during the search the military was fielding numerous reports from civilian observers. In all 6 mines and 24 Terne rockets were fired, with no results.

Paul Paulsen Frøyen saw 2 U-boats between Lavik and Vadheim in Ytre Sogn, about 5 miles from land or about 40 miles inside the Sogne fjord, on Friday, June 2, 1989.

I went out of my car and watched the U-boats for 2½ minutes, Frøyen said. I’ve grown up with the norwegian Kobben submarines, and these were not similar to them. I’m certain that the U-boats had to surface in order to communicate.

I watched the periscopes and the towers on both U-boats, and when they submerged, I observed the spray from the propellers in the nice weather. The Royal Norwegian Air Force sent 2 jets to look for the submarines, and the Coast Guard was ordered there as well. Military sources told the press that these objects could not have been submarines.

On Wednesday, September 19, 1990, KNM Stavanger had a sonar contact with an unknown U-boat in the waters off Ona lighthouse about 18 miles outside Molde. The vessel sent international warning signals but got no response. In an effort to get the U-boat to surface, hand grenades were dropped into the water. When that failed, at 5:30 p.m. the Stavanger shot off 3 Terne rockets. The sonar contact ended, and the next day the search was called off. The stavanger managed to make a recording of its sonar contact with the unknown object.

It is a fact that the Norwegian Defense Forces have never managed to force a single foreign submarine to surface. Perhaps there is a reason for this. It is logical to assume they know a great deal more about foreign activity in the fjords than they are willing to acknowledge publicly. It is not smart to advertise all one knows in these circumstances. Conceivably the activity is permitted to take place so that diplomatic conflict may be avoided. Norway is, after all, situated in a sensitive area both geopolitically and military. The Norwegian defense authority regards a U-boat search as successful whenever the U-boat leaves the area.

Or at least that is what is said for public consumption.

All the rest of us know is that we have reports, so far unexplained, of unidentified objects able to operate in both the atmosphere and the aquasphere.