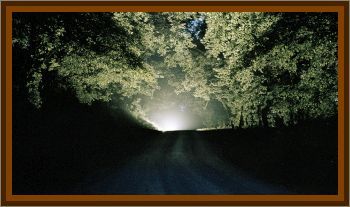 During his 1972 summer vacation, a university student engaged in night plowing work on a remote property out of Garah, near the western NSW/Queensland border, experienced an extraordinary encounter. The following details are based upon my own interviews with the witness. At about 1:30 a.m., on December 16th, 1972, the student stoped the tractor near the access gate of the paddock he was working in, for a short break. He soon heard a high powered engine noise approaching. As the surrounding countryside was typical of western NSW, mostly flat, the monotony of which was broken only by scattered bushland. He was extremely puzzled when he was unable to locate the source of the approaching sound. Whatever it was, it seemed as if the source deccelerated as it appeared to pass by some 500 yards away. It finally gradually died out as if the low altitude aerial noise source had come to rest down the road, some 2 miles away. The witness likened the sound to a semi-trailer, but he felt that even without lights a truck would have been quite apparent. Of course invisible flying trucks are quite rare.

The witness soon dismissed the incident and some 5 minutes later was ploughing directly opposite the gate at a spot near the paddock fence perimeter. It was then he noticed a single light approaching. Its location and the lack of undulating movement as it moved over plowed ground made the lights source all the more curious.

The strange light entered the field and moved towards the tractor driver at a steady height of about 10' and speed of about 30-40 mph. As the light came closer its appearance became apparent, a small circular “object which had what seemed to be a smaller concentrated light center. The bright light evident, which illuminated a wide area, appeared to be radiating from the surface of the circular object and not from the central mass. It did not appear to be solid, but the center appeared to be more concentrated. The shape of the sphere was traced out by 3 (or 4) ill defined lines on the outside of the object. These circles or ribs of relatively, well defined light were seemingly geometrically evenly spaced and all met at the top and bottom of the object, like meridians of longitude. The total diameter was 3' with the concentrated center apparently 8 to 9 inches wide. The total display appeared to be constant.

At 50 yards distance the object made a smooth turn and then stopped just 20 yards away. It hovered there for about 5 seconds then suddenly vanished. The object reappeared behind the tractor driver, just outside the paddock fence line, still at about 10' altitude. It continued to move away in the same direction, finally disappearing in the distance. The total duration of the light phenomenon was between 1 to 2 minutes. Other people in the area ostensibly saw similar phenomena at about the same time.

During 1974 in the Bega district of NSW, a local farmer encountered a similar extraordinary phenomenon. His account can be found in the Bega District News of September 17th, 1976. After checking fence posts on his property, the farmer was finishing up, when he heard a very high pitched sound, a bit like air escaping from a high pressure tractor feed.

I tried to locate the source of the sound, but as the light had almost gone, it was difficult to see anything, let alone not fall over a fallen limb.

The noise grew in volume until the farmer realised it was coming from the vicinity of a boulder which sat out in the middle of the field. From behind the boulder, a bright yellow, orange light shone out.

My first thought was that it was a fire, but the light was too constant, As I got closer, the noise got louder. I got level with the rock and pocked my head around the corner and my Heavens, did I get a shock.

There on the ground was a bright globe of something, about the size of a football, I suppose. It was a very bright yellow which then changed to a bright orange and then to yellow again, the cycle taking about 5 seconds each time.

My first thought was that it was a fireball, but it really wasn’t sitting on the ground. I think it would have been about 6" off the ground. There was no sense of heat, but when I tried to get closer, I could feel my skin tighten, and all the hair on my body stand up.

It was like trying to walk into a very strong wind, so much so I couldn’t get any closer.

I walked over and picked up a dead limb of a tree, and poked this at it, but I couldn’t get too close at all, it just seemed to slip away, like two magnets opposing each other. Then it went a vivid green and started to fade away, and finally there was nothing there. At this time the noise was unbearable, but as it faded so did the noise. I did notice a sweet, sickly smell, but that faded quickly too.

An anonymous anecdotal account in a newspaper hardly constitutes evidence but the story is certainly compelling. Although not specific about weather conditions, stable conditions are implied, making it difficult to invoke a ball lightning mechanism. This account certainly stretches the point.

Bruce Cheeseman, explained how he and a friend were driving near the Queensland Northern Territory border, out of Tennants Creek, during November 1979. They stopped for a break and also to wait for another truck following them. The two men saw strange lights, which they took to be bloody Min Min Lights. The other truck pulled in behind the first. Two aborigines with them became scared of the lights, calling them debil, debil. They retreated to behind the trucks. The lights appeared to be about 3' in diameter and looked like a swirling ball shaped manifestation. The lights would change, ostensibly with the angle of observation, from a very pale grey, misty grey, to a hazy blue. When they moved the lights changed from a blue to a hazy blue, to a light green color. As the men closed in on the lights a peculiar smell, likened to ozone, was noticed. Horses, they were carrying on a float, became very agitated, and there was extensive static on the radio, like a very high-speed engine and buzzing noise. These aspects suggest a possible static electricity explanation, albeit a rather amazing form of it. One of the men took photos of the lights at a distance of only 30'. This extraordinary phenomenon remained in view for 4 to 6 minutes. As the group closed in on them, the lights went off across a paddock and down towards a gully, disappearing into a washout or donga.