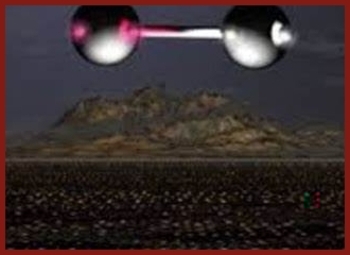 While driving along the A5 towards Towcester, heading towards the village of Church Stowe, on November 22, 1978, Elsie Oakensen encountered a UFO. The craft was stationary, it was a grey dumbbell shaped craft and had two bright lights on the underside of each end, one light was red the other green. The green light began flashing, her car came to a halt without her applying the brake, it suddenly became dark even though it had been light a moment before. A bright light shone down on her from above, then the darkness disappeared and it was light again.

Elsie checked the time when she arrived home and noticed that her fifteen minute journey home from work had taken thirty minutes. It was later found that another person, Georgina Lourie along with her three friends were driving around the same time as Elsie and they too saw a light at the same time. Georgina’s car also stopped and the four occupants of the car saw the object fly away at a phenomenal speed.

In 1979, Elsie Oakensen was regressed by Martin Keatman one of BUFORA’s coordinators, during her session she described a bright light coming towards her and two ghost like entities looking at her. The UFO encounter transformed Elsie’s life, she became involved in occult matters, finding she had gained psychic skills leading to her becoming a spiritual healer.