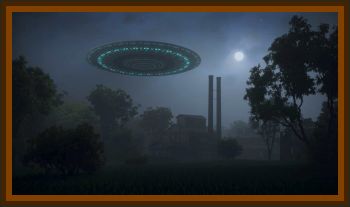 There are many local cases that, over the years of UFO investigation, have been filed, forgotten or just plain ignored.

Many times that is justified. Sometimes that neglect is due to lack of circulation or knowledge that the case even exists even though there is much interesting material to think about and remember.

That’s the situation with a case I investigated in April, 1979.

Its only public mention that I know of is a brief paragraph on page 144 of Ray Fowler’s Casebook of a UFO Investigator.

Now, in retrospect, 20 years after the case report has disappeared into the MUFON files without further notice, the case events can be seen in an increased light of understanding, although not everything can be fit coherently in place.

It’s worth writing about now.

The case came to Ray Fowler’s attention through his state police connections.

Apparently, they had received the report from the local police on Martha’s Vineyard where the sighting occurred.

Since MUFON had no representation in Duke’s County, no one in the Boston area wanted to take the time and expense to interview the witness, that is, until I volunteered and so was on the Vineyard ferry on April 7, 1979.

On March 27, 1979, Ed Brown, pseudonym, age 19, was traveling North to Oak Bluffs along the narrow Edgartown-Oak Bluffs Road at about 50 mph, It was about 10:00 p.m. and he was listening to WRKO, 680KHZ, when he noticed a green glow behind the sand dunes on his right.

It must be people on the beach using light sticks, he thought.

As he proceeded, the glow brightened and his radio began to pick up a low frequency hum. He reached a point where his view was unobstructed by dunes.

Apparently in contact with the water, was a luminous green cylinder with rounded ends at a distance which we later estimated at about 200'.

Ed stopped his car with the engine still running and the headlights on. The object immediately began to rise slowly and Ed could see water motion as if the object had been in the water. As he continued to watch, the object rose to a height where sight of it was blocked by the car’s roof.

Ed then got out of the car and stood by the driver’s side with the door open and the car’s interior light on.

The beach and water were now illuminated by the glow from the object. The witness continued watching the object rise with increasing speed for a few seconds and decided to reach into the car for a 12 volt quartz light which his father used for checking unoccupied cottages in the off season.

Ed intended to shine this light at the rising object but couldn’t turn it on for he found himself unable to move except for his head. Was this self induced paralysis or induced externally? Ed couldn’t decide. He then watched as the object rose out of sight.

Reenacting events at the site, we were able to time the entire incident as less then 2 minutes from the initial glow until the object disappeared. The object itself was in view for less than a minute.

To Ed, it seemed that things had taken quite a bit longer. He estimated 6 minutes. He immediately headed for the Oak Bluffs police station where I found his report logged at 10:30 p.m.. The officer on duty remembered Ed as unusually excited and possibly scared, unusual because Ed was known to the police as an auxiliary policeman. What he was saying was definitely out of character.

Even considering that it took Ed about 10 minutes to get to the police station, there still seemed to be a gap in time between his 10:00 p.m. sighting and his log report at 10:30 p.m..

The next day Ed noticed that his calendar watch was indicating the correct day of the month. At the time of the incident it was reading 3 days fast, and had been running consistently fast. Ed had not corrected it because of the amount of time it took to adjust. He would have had to move it ahead 29 days in daily 24-hour increments to have it read correctly.

For at least the next month, the watch kept accurate time instead of running fast. At the time of investigation the watch did not effect a compass held close to it.

I assumed then that there couldn’t have been enough time for an encounter to have taken place. I have since learned that this isn’t necessarily the case. There are some encounters that seem to take place instantaneously.

I will not elaborate on that statement here, but it’s based on my case data developed in other situations.

The most puzzling aspect of this case then and now is the watch correction issue. Since the correction was noticed the next morning, I suspect the possibility of an encounter after Ed retired for the night. But that is only rough conjecture and explains nothing about the correction mechanism. The watch was an inexpensive manually wound Timex.

If anyone reading this has an idea of how a date correction like this could have happened, let us know.