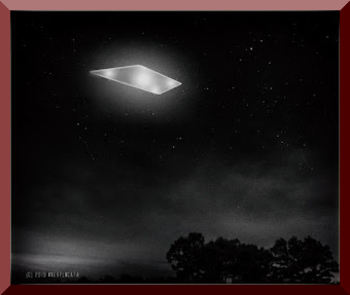 He says that 3 teenagers from 16 to 17 years old, 2 boys and a girl, took part in an astronomy bootcamp in the mountain near Nyons, in the Drôme.

The group, whose other members had remained in Nyons for the night and were to arrive only the next morning, was lodged in a farm at about 10 miles approximately of the city. The 3 young people were only at this time as the family which accommodated them was already in bed. They went out to observe sky and have noticed curious luminous object whose rhombus shape was visible with the binoculars, which passed several times above them, for finally hovering above the nearby wood.

The young people decided to go to see more closely, but when they were at about 150' approximately of the wood, the object suddenly disappeared in the spot with no move, it was not simply suddenly not there anymore. The young people thought that it had perhaps landed behind a clearing and continued to advance, but they did not know the places yet and could not find a path to penetrate the wood, their only source of light being a flashlight. After having fought a few minutes with the heavy undergrowth, they gave up, but the next day, they went back to the spot, and found that there was a path in front of which they had passed without seeing it in the night. They borrowed this path and came to a clearing at the end of a few minutes.

They are quoted saying:

As soon as we emerged in the clearing, we noticed a large yellowed and hardened grass circle, which seemed burned. It was approximately 15' in diameter, perhaps a little more. Thereafter, Mr. X, who lodged us, showed us in the mountain circular grass zones appearing yellowed from the distance, but which were actually grass grazed by his sheep. But the circle of the clearing was different, the grass was desiccated there, not grazed, and the roots like were burned, dry and friable. And, in any event, Mr. X confirmed to us that he never took his sheep to feed in the wood.

The next day, the 3 young people went back to the clearing, but did not find anything new. One of them believed to see, in the trees, a silhouette of small size, like covered in silver clothing, but he was not sure and easily conceded that it might have been just an illusion. They then decided to cross the wood because there was a kind of quarry on the other side there were many fossils. Later, after having picked up some ammonites, they went down again towards the farm by taking a stony path skirted by the wood, on a side, and by a field of lavender, on the other side.

They are quoted saying:

We were at the top of the way and we discussed, stopping frequently. It is there that we heard a noise coming from the wood. We first did not pay attention, thinking that a member of our group was walking in the wood, just like we had done little before. We thus continued to discuss quietly. The noise persisted and approached. It was exactly the noise produced by somebody walking in the wood, breaking branches and making noise with the bushes of the underwood.

As the noise was near now, we automatically looked in its direction. As I said, we expected to see one of our comrades of the boot camp. But we saw nothing, nothing at all. At this time, we were not at all afraid, we were simply puzzled. It was weird all the same, this noise of step which appeared to come at this time from 10' at most whereas we did not see its source.

The underwood was certainly quite thick, but the trees were rather sparse. It was a clear day, our vision went all the same rather far in the wood. However, we saw nothing at all, we only heard this noise of steps which approached more and more. That could not be somebody trying to scare us while walking and hiding from tree to tree or hiding behind the bushes.

First, the noise did not match that but was indeed of someone walking quietly, second, if that had been the case, we would have seen him all the same. So then we started to be anxious, even if we do not want to admit it.

Instinctively, we moved back a few steps, I think. Then, we again stopped, watching. The noise of steps had stopped too, during maybe one or 2 seconds, then it began again. It was very near now and there was still nothing visible. A second time, we heard the steps on the way, making the gravel grate. We were perhaps within 150' from the edge of the way. There, we really had the jitters and we ran like hell to the farm without looking back. We did not tell anything to the others, because they were very skeptics on what we had seen the first night, also, perhaps, because we were not very proud of us, to have surrendered to panic like that. The next day or 2 days later, I am not very sure of the day anymore, I experienced again, alone this time, the same thing on this same way. I had sat on a slope at the edge of the field of lavender, the back at the wood, so, when I again heard steps coming from the underwood, frightened by the previous adventure, I leaped at once on my feet and I looked back. There was again nothing visible there.

Immediately, the noises of steps arrived on the way and came towards me. I did not ask for more and I fled like a rabbit. Definitely, I am not very courageous.