Out in the Middle of Nowhere 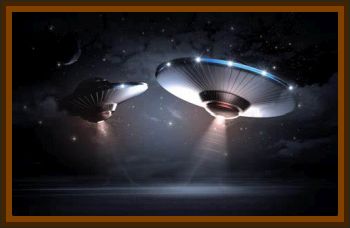 Well, I don't think it was aliens, but, I'm fairly skeptical of everything, these days, so…maybe?

It’s still a dirt road to this day.

There's about 440 acres left, surrounded by thousands of acres of state land. Nobody lives out there anymore, and even back then, only a dozen people lived on the whole 45 mile road.

It started in the early 1990s, 1992 was the first year I noticed it. My uncle and I were out baling hay during the summer, it was a late night, and the dew was beginning to fall, so we had to call it quits for the day, it’s not good to bale hay when the dew falls. Anyway, as we were heading up the hill, to the barn, I was sitting on the wagon, on top of 120 bales, and I was looking at the sky off above the trees, because I'd heard a low hum over in that direction. Then I saw a string of very slow moving kinda bluish/white lights, maybe about 1000 yards away, and maybe at an altitude of 1000' to 1500'. It would move one direction, then stop for 10 to 15 seconds, and stay there, then move in a straight line to another spot, and stay there for another 10 to 15 seconds. It did that for about 20 minutes or so. I remember thinking at the time:

Are the aliens trying to abduct our cows?

When I first saw the lights, I thought maybe it was just helos from the air national guard base, since they used to fly around up here quite frequently, with helicopters, A-10 thunderbolts, and F-16s for years, and even used some of the hills around here for target practice, we used to be able to find spent 30mm casings all over the place, but the lack of any real sound, except a weird hum, kind of dispelled that idea.

Then, the odd, quick straight movements showed that it wasn't any normal plane I knew about, and I have been studying military aircraft since I was 7. Then I thought maybe it was a Harrier, but again, those things are noisy as hell during a parade. Plus, it was bigger than a Harrier, by about 3 times, at least.

I tried a couple times to drive over to the lights a couple times, but both times, the lights just disappeared by the time I got halfway to them. So, I have no idea what it was, but it wasn't any aircraft we officially have in operation. So, technically, it could be called a UFO, I guess.

I would guess maybe some new quiet helicopter, a fairly large one, or something like that. Although if aliens do visit, I suppose it could be one of those, too.

Though I have no idea why aliens would bother visiting a ranch out in the middle of nowhere, Michigan, except maybe they wanted some fresh cheeseburgers, although none of the cattle ever turned up missing, so who knows?

The last time I saw it, was in 2004. There were 3 of whatever they were. All moving around like they were dancing? I guess that would be the best explanation. Maybe about 100' or 120' long. Narrow bodied. With lights in a straight line along the bodies. Not many, though, but fairly large ones. 3 or 4 lights on each one, maybe one had a broken taillight, I dunno.

I was out on the property, venting some recent frustration with my SKS and a couple hundred rounds into some hay bales and homemade targets. For a brief moment, I considered shooting at the lights, because they were so low, but then I decided that that might be a really dumb idea. Then I yelled out to them:

Hey, if you guys are aliens, can I help you wipe out those pesky humans?

They just stood there, doing their little dance in the sky, and humming along, and ignored me. So if they were aliens, they were being exceptionally rude, or…they just didn't need my help.