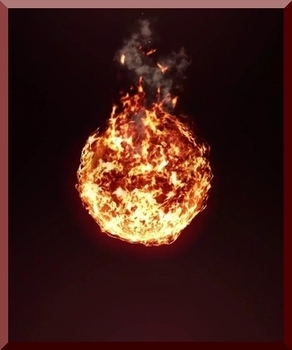 It was a warm and absolutely clear, typical southern late evening on the Black Sea resort, on the shore of the calm Black Sea. The small village, Novo-Mikhailovka, 30 miles West of Tuapse, positioned in the center of the small sea gulf and our camp, summer camp of Polytechnic Institute of Leningrad, occupied the shoreline right behind the pebble beach of the Black Sea.

My girlfriend and I walked down the beach about ¾ of the mile towards the narrow shore and tall cliff with very rocky beach. Not too far from the beach, 10' into shallow water, there was a square shape rock about 6' x 6' x 6'. It was really fun to climb on that rock and sit on its warm surface, slowly giving away its warmth accumulated during hot and sunny day.

Typical for that area and time of the evening, sky was almost black and stars were bright and vivid, no city lights. The horizon was barely seen against the sky, almost black against black background. The landscape of that area consist of hills and valleys, on the left, from my position on the rock facing the camp and gulf. I was able to see the beginning of the cliff.

In addition I was well familiar with this area, it was my third summer I spend at this camp as the member of scuba diving team. It was no wind and very calm. No sounds, except really faded sounds of music from the dance court in the distance.

Then I noticed rather bright object, moving silently from the left to right below the hilltops. The object I can describe as the fireball. It had the size of the medium size moon. It was glowing and had the reddish in the center and yellowish colors to the outer diameter. It was slowly moving through the sky and was visible on the backgrounds of the hills. But it did not illuminate any area under it. It had a visible diameter and shape of the round ball. I can roughly estimate its diameter as 12' to 30' Therefore the distance from me and to the object, and the fact that it was seen against the hills, known distance of several miles to the furthest hills, could be determined as 2/3 to 2 miles. It was slowly following the descending trajectory, slow and steady. It than quietly disappeared,

I would say landed, in the woods within the hills, 1-2 miles from the shore. The hillsides are covered with thick and mixed southern trees and bushes and it was practically impos sible to get to that area. The next day we made an attempt to find the place of where it could fall or land, but could not find any signs of object.

The most unusual in movement and appearance of the object was the position of the tail of flames, which if it were a normal falling object or burning meteorite would follow the trajectory of the fall. In reality the tail was turned about 10° to 15° counterclockwise, pointing the end of the tile to 8 o’clock position, and did not follow the trajectory like blown fire tail would normally be. That was very strange to watch such an unnatural movement. The tail size was about ½ of the diameter of the object in length and 1/3 of the diameter thick.

The whole object had a shape of the mirror image of the punctuation mark, colon, rotated with the round point to the right and the tail to the left.

The object, at my opinion, was obviously not a meteorite, it moved too slowly for the falling meteorite. The distance of couple of miles or less from the moment I register it in my field of view to its disappearance in the hills this object being seen for 2-3 minutes.

It moved really slowly. It also had a visible diameter and shape. And the most important, the position of the flaming tail, it should follow the direction of the trajectory, but it was not, it was rotated down, counterclockwise 10° to 15°.