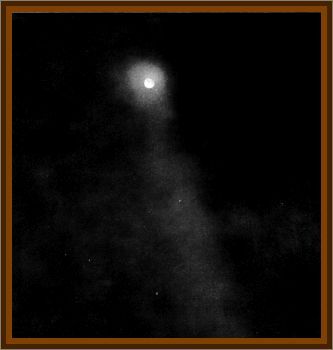 This is an outstanding series of visual sightings of a strange aerial object that took place in or near the area from August 19th of 1949 to March 10th of 1950. The alleged observation of a massive object by searchlight operator Donald R. Berger, and meticulously detailed in his logs, remain one of the more curious events in UFO history. This case is exceptional not only because of the dramatic event reported, but also because of the caliber of witnesses involved. The series of incidents were said to have been witnessed by civilians, by clergy, by scientists, by police officers and military officials.

Photos were taken on October 23, 1949 by Norwood Police Sgt. Leo Davidson, and 2 reels of 25' motion picture film were kept in the possession of Reverend Gregory Miller, last seen at WCPO Channel 9 TV studios in 1952. Still frames from the movie film were given to investigator Leonard Stringfield and published in his book. That photo from his book was scanned and enhanced for this report. Using this same photo, an earlier analysis had been made by Dr. Richard Haines.

An additional photo was found in the possession of Ray Stanford, who states:

This is several generations down from the original 16 mm movie film, but it seems to rather clearly show that while the beam was projecting several degrees away from the object, when it got within a certain event horizon of the object, it was simply bent or pulled the beam directly into the object, seemingly bending it about 26.5°, as measured in the photo plane. This frame has always amazed me since I first saw it in the mid-'50s. Several persons, back then, who had seen the actual movie said that at one time the object seems, indeed, to suck the beam squarely into it.