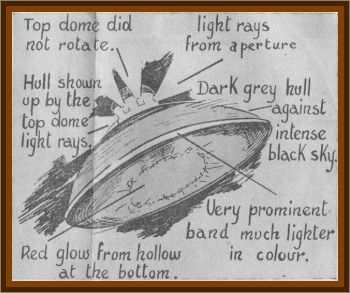 Mr. F.W. Potter, an amateur stargazer and member of the Norwich Astronomical Society, was perusing the celestial firmament above the wide Norfolk skies with his 3.5 inch telescope.

Imagine his surprise when instead of seeing the moon, or some Clangers, Mr. Potter viewed an unearthly craft speeding from one bit of the solar system to another. Mr. Potter described the object thus:

“Rays or beams of light could be seen distinctly from the dome and attached directly beneath it was a much larger and flattened dome with a protruding band running in a circumference around its edge. This was clearly seen in the telescope by the rays of light thrown out from the apertures in the top dome. The underneath of the large flattened bottom dome was hollow and appeared to be glowing red, but there were no vapour trails or gases to be seen.”

Mr. Potter did what any right thinking local citizen would do, and contacted the Eastern Evening News, who ran the scoop the following day, with a letter from Mr. Potter on the subject also appearing in the following Sunday’s Observer.

The craft Mr. Potter saw was a popular make at the time, thanks to a Californian named George Adamski, a UFO ‘contactee’ who in 1952 claimed craft, looking much like those seen by Mr. Potter, were piloted by handsome Nordic looking beings from Venus, who were into peace, galactic brotherhood and appearing to just one or two people at a time because anything else would obviously cause a panic.

Adamski backed up his claims with photographs showing the Venusian ships either in extreme close-up, or viewed through telescope over great distances, with no background features visible.

Despite seeing these saucers land, meeting their occupants and being taken inside a ship for a guided tour, Adamski was somehow unable to provide photographs of these latter events, a pity, as such pictures would have made his story more credible, if less lucrative. They, don’t make saucers like that anymore.

Since almost everyone possesses the means to take pictures, or make a film, in their pocket, the saucers became shy. No longer are incongruous objects, be they shaped like cigars, saucers, or spinning tops, to be seen in the corner of a box brownie’s eye, the days of the close encounter of the Instamatic kind are behind us.

Venus, (as we are led to believe), is covered in thick, impenetrable clouds for most of mankind’s history, is now known to more closely resemble Hell than a peaceful, flourishing utopia.

The New Horizons probe, with its findings about Pluto and its moons, demonstrate we no longer need rely on the fantastic figments of our imagination to get excited about space.

However, it is nice to know that, at least for one evening above South Park Avenue in 1953, some of that excitement, and the very human hope we might not be alone, glided across Norwich in full view of a Mr. F W Potter.