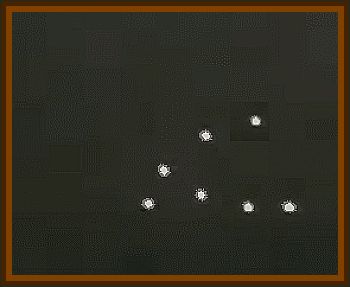 During Desert Storm, my unit was staged in the northern Saudi Arabian desert, about 50 miles south of the border with Iraq.

On at least two occasions, as I was performing perimeter guard duty in the early morning hours, I was sitting on the edge of the perimeter, scanning the area to my front, when I suddenly had the feeling that something was over me.

I looked back over my shoulder, and saw what appeared to be 5 lights, almost identical to the brightness of stars, in the shape of a V flying above me.

It was a moonless night, but in that part of the desert, starlight shone brightly, and whatever this thing was appeared out of nowhere.

What struck me as strange is that it made no sound at all, but it looked like 5 stars moving slowly over my unit. I kept watching as this thing passed over my unit, and then moved beyond me and slowly out of sight. As it passed over, all that could be heard, was the faint sound of a rush of air, like a low wind blowing. I have no way of judging the size of this object, as I could make out no shape of an object, only V shaped lights, but compared to the size of a Boeing 747, a plane of that size to have lights spread to those dimensions, would only possibly be 100' off the ground to be that size.

Within 5 minutes, this cluster of V shaped lights flew silently over again. Twice in one night.

What was surprising in this, I was not the only person in my unit that saw this thing. In fact, nearly every person in my section at some time or another saw this cluster of lights silently flying over our site. I happened to see it again on a separate night of guard duty, only this time, I also had a set of night vision goggles with me. The thing flew over again, and I tried my best to train my goggles on it, but the only thing I could make out were the five lights, no form or outline of the object could be made out.