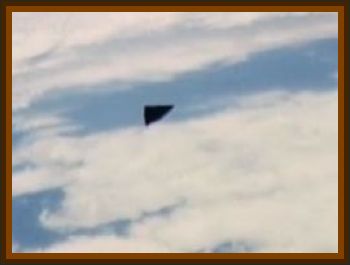 For the past 4 months from May until September, I have been making a weekly commute from Washington D.C.s Ronald Reagan National Airport to Atlanta Hartfield Airport.

I go on Monday to Atlanta and return generally on Friday evening from Atlanta to D.C. On July 21st at or near 6:15 p.m EST I was riding in first class on Delta flight 1402, 757 service, in seat 3C, window, on the right side of the aircraft.

I was looking out the window watching the massive thunderheads roll by. I noticed a grey metallic triangular shape hovering inside a thunderhead that had a lot of lightening activity.

The pilot was giving this cloud formation a relatively wide berth and the cloud formation was about 1,500' to the right of the aircraft. It was quite bumpy and the captain issued a seatbelt warning for turbulence in the area.

I kept watching the unidentified aircraft, trying to determine if it was a ballon cage, a weather balloon, or some other known aircraft.

I could not recognize what it was, nor am I familiar with an aircraft that can hover at 31,000' inside a very active thunderhead without grave risk. I stood up to see if anyone else was noticing what I saw and nobody was looking out the window.

Note that there were no blinking lights on the aircraft though it was quite visible if you were looking below the airplane and to the right just inside the thunderhead. I never said anything to anyone, though I do know the copilot quite well. I fly on her route very often so we always say hello.

I have been thinking about asking her about this event when I next run into her. Otherwise, I have kept my mouth shut because most people just think you are wacky when you say you've seen something unidentifiable in the sky. As an Engineer I live in the world of the rational.

Technologically we have a long way to go and there is a great deal of innovation and secret activity at both commercial and governmental facilities.

I would never, ever just assume this was an extra terrestrial space craft, it was too small for one thing, my view was that it was about the size of a 737 aircraft or smaller.

Anyway, thats my UFO sighting. Nothing glamerous, but definately something outside my experience. I do have a very strong interest in both commercial and military aircraft, historical and in development, and this wasn't something I was familiar with.