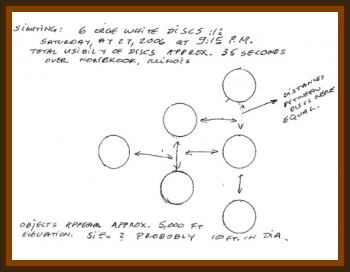 I walked out of the house in Northbrook, to take my dog for his evening walk.

It was a gray overcast evening with temperature. in the 1970s, with possible some rain later in the evening. As I walked out of the house, I looked up in the sky to check the weather and if I should be for short walk in case of rain.

As I looked up in the sky, there was no visibility of any stars, the sky was dark gray, no stars were visible.

Aa I looked up in the sky, I noticed 3 large disks located northwest.

The disks were white translucent in perfect alignment from each other. I watched the disks for about 8 seconds, when another 2 disks, same size, appeared just in front of the first 3 disks.

They were spaced away the same distance as the distance between each disk in the first row, the appearance lasted another 8 seconds, when one more white disk appeared in front of the two.

That made a total of 6 disks arranged in a perfect triangle. The distances between the disk sideways and from each other forward were exactly the same distance. The disks stayed visible for another 8 seconds and then vanished.

In about 8 seconds the 2 disks appeared again and stayed visible for another 8 seconds and then vanished. I stayed outside for another 15 to 20 minutes, watching the sky, but no further appearance was observed.