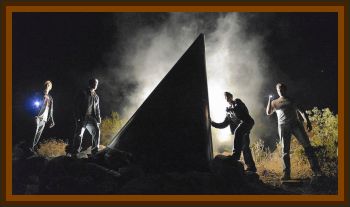 It was dull gray, gun metal, in color with greenish lights, about 10'in diameter and 3' in height.

3 gray humanoids, including one that was still alive, and a human female abductee, Lorraine Dvorak Cordini, were found onboard.

The craft, bodies and survivors were moved to Edwards AFB.

The witness, Debbie Clayton, reported that she heard a loud roaring sound and then a loud crash.

Outside she could see a cloud of dust several blocks away. She walked over to the crash site and while other civilians were studying the craft, the military arrived, weapons drawn.

One of the civilians had been taken photographs and an Air Force officer ripped the camera from his hands and smashed it, but didn’t try to remove the film.

The craft had no markings but seemed to be scratched. There were no windows or seams, and it appeared to be molded in one piece. The texture was smooth.

The military told Clayton to leave or be arrested.

The military then covered the craft with a large canvas and lifted it with cables attached to the canvas. Once it was loaded, the military left and there was no mention of the incident in the newspapers.

The cause of the crash was later established to have been a technical malfunction.

Lorraine Dvorak Cordini later was able to remember, despite the fact that the military attempted to erase her memory with the use of drugs, hypnosis, that she had been traveling onboard the UFO from a mothership in space. She was dressed in a tight fitting pink body suit. 3 extraterrestrial crewmen were returning her to Earth in a small pod like craft.

Lorraine soon found herself standing amid the wreckage. One dead alien was far to her left, barely visible from where she stood, another dead alien was about 20' in front of her.

A military person was apparently kicking the alien’s dead body. The third alien crewmember was alive and standing about 20' from her, dazed, confused and disoriented. She too felt this way.

Then she felt a jerk as a military person grabbed her arms, brought them around her back and handcuffed her. As they were hauling her off she received an image in her mind of the captain onboard the mothership.

It was a tall, 6' humanoid in a long white gown, short brown hair, female, which was communicating to Lorraine how sorry she was for not being able to help her and the other aliens, for if they did they would be detected.

Her sorrow was apparent. Other aliens were around her and the same feelings of helplessness and frustration were felt. The other aliens resembled small gray humanoids, similar to the ones seen in the movie Close Encounters. Lorraine was then thrown into the backseat of a black limousine.

Her next memory was what surfaced in the hypnosis session.

Lorraine was lying on a cold metal table in a hangar. Three military persons stood to the left of the table. One may have been an officer because he had a different cap than the fatigue uniforms of the other persons. Another uniformed military man was at Lorraine’s head and to the right and to his left was an alien whom Lorraine described as having a pumpkin shaped head.

He had appeared in a childhood experience that previously surfaced during the same hypnosis session.

In the childhood experience he was in a spacesuit… Lorraine’s child’s mind saw him dangling outside the window in a deep sea diver’s suit. This alien was about 4' tall, his body bulbous and brown. His head bulbous and pumpkin like.

Lorraine heard the alien thinking how great he felt about himself and how proud he was to be in the service of the Earth military men… he had a smug attitude and the military man next to him showed contempt towards the alien. She was very confused and disoriented.

Her next memory was of being yanked off the table and being dragged outside the hangar. There she saw many flashing red lights and screamed:

The military men then sat her on a bus and she ended up in San Francisco stranded and lost.