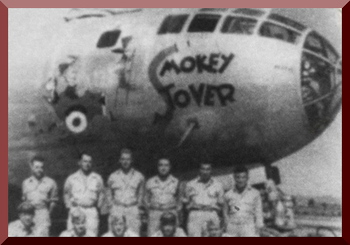 I was part of the 8th Air Force during WWII. We where on a bombing mission in the early hours of the Normandy landings our target was a railroad depot where the Germans used that railroad to bring men and material up to the Atlantic wall, so being that reinforcements could be brought up and to cut supply lines it was a target.

After all these years I've lost the coordinates of our target. About 10 minutes after we crossed the coast. I heard one of our escorts over the radio call out:

Now, after I heard this, I went to cock my weapon I was the right side waist gunner looking inside of our formation before we left on our raid. I then checked and rechecked my weapon.

One of the objects appeared in between our formation and I went to cock my weapon and it jammed. I tried my best to check the jam. It appeared normal.

About 15 minutes after it appeared, it disappeared and my weapon had cleared. It was the strangest thing ever because we also had radio loss and our #4 engine had stalled out.

I am writing this on behalf of the veteran who I heard this story from.