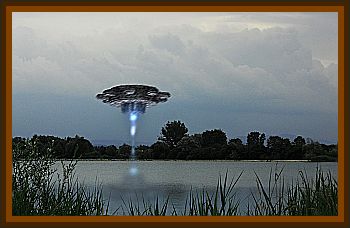 What could be better than to be visiting Canada, a beautiful lake, night air, moonlit water?

What a peaceful, relaxing idea that is. Unfortunately for 2 people, all of these nice things turned into a frightening experience, and changed their lives forever. From the notes of researcher Dr. Peter Millman comes this true story.

At the time of this story, Millman was working for the Nation Research Council of Canada. He received the facts of the case from the Department of National Defense.

The 2 people, who gave their report to Canadian officials, have asked to remain anonymous, for fear of ridicule. It was on June 18, 1967 that their case begins. Taking a nice, peaceful boat right down a northern Ontario lake, Mr. & Mrs. G. were visiting friends, and began their ride back to their cabin. As they are enjoying the moonlit night, they were shocked to see a brilliant unknown object. This object was simply hovering about 50' above tree level, and approximately object of a mile away from them. Slowing their boat down, they make a turn to get a full view of this strange object. As they sit in wonder, suddenly the object begins to pick up speed, racing straight toward them.

Mr. G revs up his 75 horsepower motor, and gives it all it’s got, heading to the lake’s shore.

The distance between themselves and the object allows them just enough time to arrive on the bank. They quickly exit the boat.

Looking back up into the sky, they see the object has taken back it’s original position. After a few minutes of time, Mr. & Mrs. G decide to try a return trip back down the river to their neighbors’ house. Shortly after launching into the water, the object again makes a move to descend upon the 2 terrified witnesses. Again outracing the craft to the shore, the pair ditch the boat, and run to another house, loudly and excitedly rousing their acquaintances.

Their friends would later state that Mr. & Mrs. G were honestly and profoundly frightened to death by what they had seen.

Now there were several more witnesses to this unusual, brilliant object, just hovering above the trees that surrounded the quiet waters of the lake. They watch the object for another 10 or 15 minutes until finally it races into the night to the west northwest.

Knowing that they had seen something quite extraordinary, they make a full report of the incident. This unusual occurrence was meticulously detailed by Canada’s National Defense team. Other details derived from a thorough questioning of the witnesses revealed several important facts. The object, though it did not show a light of any kind, caused the trees to move below it, as it hovered.

The craft was distinguishable from the moon, as both objects could be clearly detailed simultaneously. The object was a traditional oval shape with a dome on top, estimated at 25' to 30' across, and 10' to 15' tall.

Though the object rapidly streaked through the sky, no sound was heard by the witnesses, nor other guests at cabins in the vicinity. One guest did observe that at about the time of the incident, he was listening to his radio, when it suddenly went dead. Later in the evening, it was working fine again. The investigative team discovered a number of broken, wilted limbs directly below where the object had hovered.

An analysis was made in Winnipeg, and the results of that examination was that no reasonable explanation could be offered for the damage to the tree limbs. The report also stated that the limbs showed signs of heat, and the samples contained no diseases or insect infestation. This is a classic case of an encounter of the second kind. This case was very well documented, and the object was listed as unexplained.