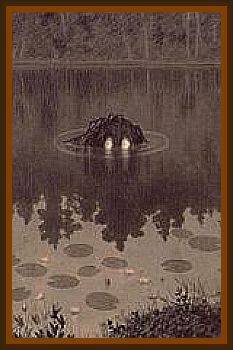 Nökken/Nyk/Nykkjen is a mysterious water creature, residing in fresh water, lakes and deep ponds. He is, in Norwegian tradition, described as a dark monster with his eyes just above the surface, watching as people walk by.

In Swedish tradition, he is a beautiful, young man, tricking women into jumping into the water, and then drowning them. He is a shapeshifter, and can change into a white horse, letting young children ride on his back and then jumping with them back into his pond.

He is also said to be a talented musician, playing the violin so that the villagers can hear him at night.

There were ways to protect oneself from him, you could throw a piece of metal into the water, like a needle or an iron cross, and so save yourself. If he had already attacked, you could overpower him by saying his name.

Meaning: Nyk! Nyk! Needle in the water. The Virgin Mary threw steel in the water! You are sinking, I float!