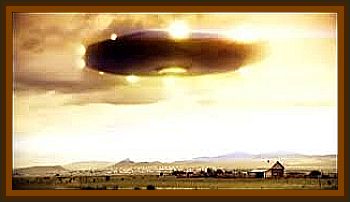 In the early morning hours, a strange object was seen for a period of time over Nogales, AZ, which is located on the border between the United States and Mexico. Several people saw the object, and have been interviewed, and it is quite likely that many others observed it.

The case is being continued, but sufficient information is available at this time to present it here.

Mrs. Helen Sutherlin, a teacher in the public school system at Nogales, was wakened by an unearthly howl from her Samoyed dog who was outside the house in the back patio. She laid in bed watching a strange bluish/silver light which illuminated the curtains of the bedroom window. The dog continued to howl so she went outside to see what was wrong.

Going through the kitchen, she reached the side door, stepped out, and was immediately aware of a peculiar droning sound which sounded as though it came from above and from some distance. When she looked up into the sky she saw an oval shaped light source which appeared to be the source of a cone of bluish/silvery light which bathed the main section of the city.

She described it as being like a flashlight shining down on the ground. It kept flashing on and off and the light from it gave cars and tops of houses a sort of irridescent glow, as if they were themselves giving off the light. Mrs. Sutherlin estimated that the light flashed on and off 8 to 10 times and that she watched it for approximately 30 minutes.

Her dog had quieted down when she came out, and she was able to observe it closely for that period of time. Although she cannot pinpoint the exact time, she said that the kitchen clock read 2 :30 a.m., at one time when she glanced at it but does not know if s he looked at when she came out of the house or when she re-entered it.

After the 30 minute observation, the lights of Nogales suddenly went out and Mrs. Sutherlin became alarmed and went inside. During her interview with Mr. & Mrs. Lorenzen she said she was sure that many people had seen the object because before the power failure she had observed many lights turned on in previously dark houses in the area.

She returned to bed and did not attempt to observe any more. Because of certain time elements in this case it is quite likely that Mrs. Sutherlin misread the clock because the power failure that she refers to took place at approximately 3:35 a.m. Our second major witness is young, 22 years of age, Marco Flores, part owner of the House & Cellar, a night club and restaurant for young people in Nogales.

At 1:00 a.m. in the morning of the 20th, he closed his business, then spent an hour working on the books so that he wouldn’t get behind in is work. At a little after 2:00 a.m. he went to an all night restaurant where he had breakfast, and talked with friends. He left the restaurant shortly after 3:00 a.m. and drove to his apartment on Western Avenue.

He then undressed and, sitting on the edge of his bed, was playing his guitar and looking out the window which faces southeast. It was approximately 3:20 a.m. or 3:30 a.m. by his estimate that his air conditioner and lights went off. Looking out the window he could see that all of Nogales, including Sonora, Mexico. was in darkness.

At that time Marco heard a humming sound which seemed to be above his apartment, and across Western Avenue he saw a lighted area approximately 1/4 mile in diameter. It appeared to be traveling from the north to the southwest. At this point it is important to note that the screens on the apartments in that complex are mounted on the outside. The window was open, so Marco decided to unlatch the screen and go outside rather han stumble through the darkened area. When he got outside he looked up and over his apartment and saw a glowing round object encircled by a ring.

Unfortunately, Marco is color blind so he could not give any description of the color of the object but he did say it appeared to be metallic and its glow reflected off the overcast sky. He estimated that it was traveling about 35 miles per hour, was at and altitude of approximately 200' to 300', and that he watched it a good minute before it went out of sight behind a hill at the rear of his apartment.

He noted that the lighted area across Western Avenue was traveling at the same rate of speed as the object itself and felt they were in some way connected.

The city lights came back on after the object was out of sight. Marco then went inside and debated as to whether he should report the object to the police.

Approximately 10 minutes later he heard an explosion and the lights which had been dimming and brightening after the first power failure, went out and stayed out.

Marco again went outside and this time saw a lighted area in the sky to the north by northeast, where the local power station is located, opposite from the direction in which the UFO had disappeared. He then called the local police and told them about the light in the north and they informed him that the power plant had exploded.

The next day he reported the object he had seen. He had hesitated the night before, afraid of the usual ridicule, and they said that he was the only one to report such an object.