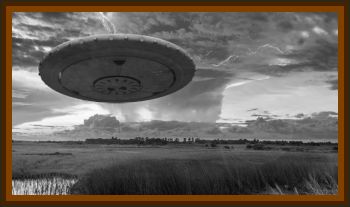 It was about 1:00 a.m. and I was outside with some friends sitting in a circle just talking when I took a moment to look up at the stars because it was a very clear night.

After looking up for about 12 seconds, a large black figure went across the sky and I had just enough time to smack my friend and point and he saw it just as it disappeared over the trees.

The UFO was black in color and was darker then the sky. It also appeared to be flying just barely over the tops of the trees, which are probably about 60' tall. I felt no wind and heard no sounds.

After the UFO had disappeared from my view, my adrenaline was going and my blood was pumping as hard as it does after running a 100 meter dash.