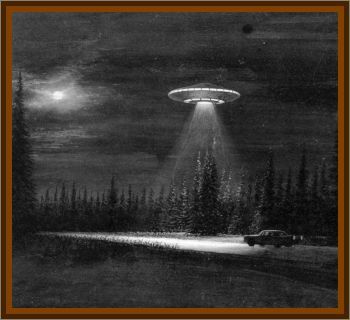 In the summer of 1979 my then girlfriend Barbara and I were returning from visiting friends. It was 1:00 a.m. and we were on Route 80 heading to Denville. As we were climbing the hill just before Denville, we both heard a female voice on my CB radio.

The woman was hysterical and screaming, asking for help. I immediately got on the radio and asked her what the problem was.

She screamed that she was being chased by lights over her car.

I asked where she was, and she stated she was driving on Route 80 West in Rockaway.

I seriously thought she was drunk or pulling a prank.

When we reached the top of the hill we saw her car on the other side of 80.

Above her car was what I can only describe as a globe of white light the size of a basketball. My eyes then were drawn to the dozen or so lights that were flying behind the car or standing stationary along the side of the highway, about 20' or so off the ground. The globes lined up and flew away.

It was at this time my car died.

Barbara began to scream as I pulled to the shoulder, what I did not realize was that she was not screaming about the car dying or the globes. She pointed to her side of the car out the window, screaming for me to look.

I opened my door, and looked over my car to the north.

Perhaps a mile away and a 1000' up was a craft...moving slowly west, it was the size of a stadium. It was oblong in shape.

There were white lights all along the sides of the ship that were moving in a circle counter clockwise in a pattern, and on the bottom was another circle of colored lights moving very fast also counter clockwise. In this bottom circle, or opening, were globes of light entering from different parts of the sky and others were leaving from this circle and taking off at speeds only seen in science fiction movies. We saw lights come and go, stop on a dime in mid air and make 45° turns while flying. We watched this mother ship for at least 5 minutes as it headed east. Once it was out of site, my headlights came back on. I was able to start the car and we drove into Denville.

We went directly to the Denville police station and reported what we had seen. The officer on duty stated to us that there had been a lot of calls and that they had cars on the highway looking checking it out.

I worked for a large retail store at the time, in one of the larger malls. Several months after the incident I was informed by my supervisor that someone was at the courtesy desk to speak with me. At the desk was a man in a dark suit. He was very pleasant and he stated he had a few questions regarding what I had seen on the highway that night. I told him what had occurred. He stated that it was routine that these things are looked into and stated that because Picatinny Arsenal was so near by, that perhaps it was military aircraft on maneuvers. He was polite and soon left.

When I returned to my desk I realized:

What the hell, I never told anyone about the incident other than close family members, and how the hell did anyone connected with this know where I worked?

Furthermore, I never gave my name to the police when we reported it, they never asked.