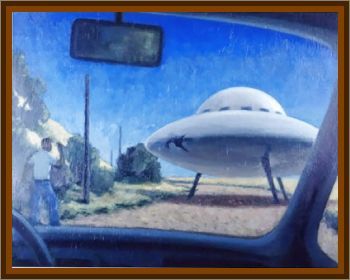 Alerted by reports of strange lights on the ground and in the air in a marshy area to the north, 2 men and a woman drove to the area in a small pick up truck. They saw a glow, on the horizon, which grew brighter as they approached. At the end of the trail they hiked through woods until treacherous ground forced them to stop 1/4 mile from the light.

They saw that this light came from a large oval machine, domed at the top, slightly rounded on the bottom, standing on legs. From a central opening a dozen or so figures could be seen going up and down a ladder.

The occupants were shorter than average and were dressed in silver colored suits with helmets resembling ski caps. The beings appeared to be carrying out repairs. The area was bathed in an unearthly orange glow and there was an absolute silence, no sound at all.

After about 30 minutes the party returned to their truck to try and find a better location, but they had to give up when their truck ran low on gas. When they returned to the spot a couple of days later, 6 large square imprints 2' square about 9' apart 2" deep, and a burnt circle 12' diameter were visible. Photographs were taken of the traces