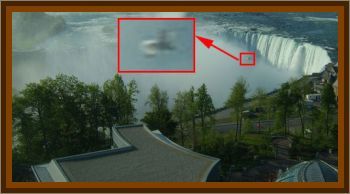 I was the General Manager of a hotel in Niagara Falls. Our hotel sat at the end of a strip and overlooked the horseshoe Falls. It was a warm October night. The sky was clear and free from clouds. There was absolutely no traffic and it was very quiet. At approx. 10:30 p.m. my security officer and I were standing out front of the hotel looking out over the Falls and the Niagara River. My security officer said to me, either someone went in the river or that looks like a UFO. It was not uncommon to see search and rescue helicopters out over the river.

I looked up and saw a very bright white light shinning down on the water moving towards us. As it got closer the light changed from shinning down to pointing towards us. The closer it got the more it elevated higher. I said to my security officer that if it keeps on the same path it's going to fly just to the left of of the hotel over a side road. The security officer was frozen at the front entrance and would not follow me to the side road. I stood right in the middle of the road and waited. Soon it was right over top of me. The first thing that struck me was it did not make a sound. The second was that it was very large. It was a black triangle with 4 lights underneath. 2 white lights on the back and another on the front tip. In the middle of craft was a red light that pulsed very slowly. The sighting seemed to last a long time as the craft moved so slow. I would say it was only 100' above our 32 story hotel. It continued west until it was completely out of sight. About a week later it came back around 1:00 a.m. when I was outside in our parking lot. This time it was much higher and traveling West to East. It was also moving much faster. It continued over the river until it was out of sight. Some very strange things began to happen after my sighting as there is much more to the story. I would be more than happy to discuss these events if you wish to contact me.