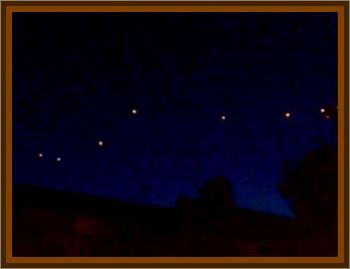 Commercial airline pilot Randy Etting took a nighttime walk near his home in Newtown, CT. He often studied the skies when he walked, trying to identify passing planes.

At around 9:45 p.m., he observed some orange and red lights approaching from the west. He got his binoculars and called his neighbors to come outside.

Etting said that as the UFO passed over Interstate 84, cars pulled over to watch. And indeed, between 9:30 and 10:15 P.M., more than 200 people phoned police to report a UFO.

The object displayed a semicircular pattern of very bright multicolored lights. Several drivers reported that their cars had lost power as the lights passed by. About 15 minutes later, calls started coming in from New Milford, about 14 miles north, alerting authorities that the lights, reported by many to be connected to an object larger than a football field, were hovering there. The lights eventually vanished, but the mystery remains.