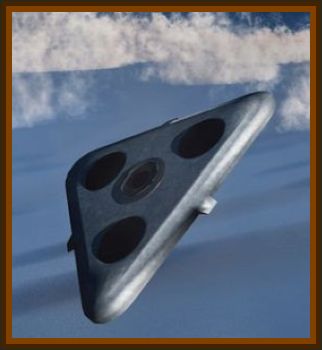 On the night of the sighting, my girlfriend, sister, and myself spontaneously decided to run to the store for some ice cream. We went outside and got in our car to leave.

I had already started my car when my girlfriend noticed the objects and alerted us to them. My sister and I looked out our window and saw 3 triangle shaped flying objects passing not too far above the tree level, perhaps double the tree level.

It was extraordinary enough that we were stuck there watching it. We didn’t hear any engine noise so I turned off my car engine to listen more closely. However, it was silent.

I rolled down my window to stick my head out and look up, as they were directly over us.

After a few seconds, I got out of the car to join my girlfriend and sister who had already gotten out to see them closer.

We stood in our driveway as they passed directly over us, moving very slowly. The objects were the shape of an equilateral triangle with large round lights on each of the 3 tips. The closeness of the objects and the light polution of the suburb allowed us to see the shape of the object beyond the illuminated tips.

We could also see the center of the body of the objects and certain smaller and very dimly lit lights in the middle of them, another color, though memory fails us.

The 3 objects were traveling in a south easterly direction.

They were moving very slowly. Our view would have been obstructed by forest and trees had they not flown directly over our driveway. So the only time we could see them was during that brief passing.

However, even this short patch of sky took them a little over a minute to cover the distance.

After it passed, we all talked about it and were excited that we saw a UFO.

However, we considered them a UFO in the true sense. An Unidentified Flying Object, not necessarily an extra terrestrial object. Our talk about it has subsequently referred to them as some sort of experiential government plane.