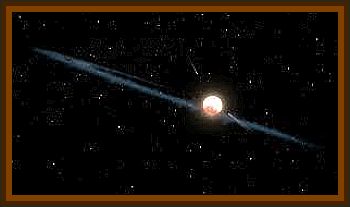 My father, mother & I, went to Rands pond to by a canoe, he parked the truck and went in to talk to the man. While my mother and I were waitng, we had time, we saw a star way off in the sky that was bright. It began to shine and twinkle, it got our attention.

It began to move and I said it is moving from left to right up and down and my mother said your eyes play tricks on you. Then the objecct got bigger and closer and bigger. Yet it got so large it lit the whole field.

My mother got scared and said stay in the truck, But I had to run to it. I got out and ran, totally wanted to go.

My mother screamed: Rick, No,

And I slipped and fell on the grass. at that point it got brighter and shot straight away in less than seconds. my father said he was gone that length of time for that to happen. But due to circumstances he believes.