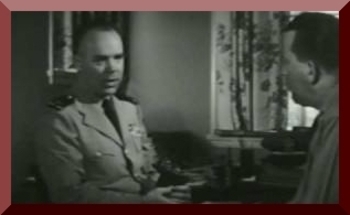 At 11:00 a.m., Warrant Officer Delbert C. Newhouse, accompanied by his wife and two children aged 12 and 14, were driving along the open highway a half dozen miles from Tremonton, UT. Shortly thereafter he testified to his Navy superiors:

...my wife noticed a group of objects in the sky that she could not identify. She asked me to stop the car and look. There was a group of about ten or twelve objects, that bore no relation to anything I had seen before, milling about in a rough formation and proceeding in a westerly direction. I opened the trunk of the car and got my camera out of the suitcase. Loading it hurriedly, I exposed approximately 30' of film. There was no reference point in the sky and it was impossible for me to make any estimate of speed, size, altitude or distance. Toward the end one of the objects reversed course and proceeded away from the main group. I held the camera still and allowed the single one to cross the field of view, picking it up again and repeating for three or four passes. By this time all of the objects had disappeared.

He also wrote to Project Blue Book, an Air Intelligence Officer then interviewed Newhouse and learned that at relatively close range, before Newhouse could start filming, the UFOs appeared flat and circular:

Shaped like two saucers, one inverted on top of the other.

The witness explained to the Intelligence Officer that he had heard no sounds, seen no exhaust or wake effects emanating from the objects. Before, during, nor after did planes, birds, balloons, or other recognizable phenomena appear in the unidentified aerial objects viewing area. He restated that the one unknown which took off on its own pursued a course opposite to its original one and to the flight path maintained by the remainder of the group. Newhouse was convinced the light from the objects resulted from reflection and that they were as long as they were wide and thin (i.e disk shaped.)

Delbert C. Newhouse, at the time of his sighting, had been graduated from the naval photographic school, and was a veteran with 19 years' service as a warrant officer, logging more than a thousand hours on aerial photography missions, and twenty two hundred [2200] as chief photographer.

He was considered particularly reliable and a qualified observer. He had no implication in UFO research before his experience, and made a sensible report, noting for example that evaluation of distances was impossible from the film because no reference point could be filmed together with the objects.