UFO Off Coast Of Newfoundland 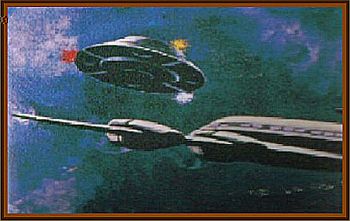 Click For More UFO Off Coast Of Newfoundland Pictures

Chapter 1 of Major Donald Keyhoes last book, Flying Saucers, Top Secret, is entitled Encounter Above the Atlantic. It describes a sighting made in the 1950s by the crew of a U.S. Navy aircraft en route from Iceland to Newfoundland. Keyhoes source for the report was Captain James Taylor, a retired Naval officer living in Washington, D.C., whose name had been given to Keyhoe by another Naval officer, Admiral D.S. Fahrney, a close friend of the Major. Taylor learned of the incident in 1956 from a friend and former associate, a Navy pilot who was one of the primary witnesses. This man, a Lieutenant at the time of the sighting and now a Commander, is identified in the book under the pseudonym George Benton. Keyhoe used this to protect the officer from publicity, because Benton was still on active duty at the time the book appeared in 1960. In April, NICAP contacted Benton and requested a personal interview, in hopes that the original report could be updated and corrected with first-hand information. The interview was conducted a few weeks later at Bentons home in New Jersey.

It was the first time he had confided details of his experience to anyone except military intelligence and his own friends & associates. His memory of the incident was only slightly affected by the passage of time, since, as he explained, I have seen nothing like it in all my years of flying. The sighting occurred in the early morning of February 8, 1951. Benton, 30 years old, was flying an R5D transport, which was returning to the United States from England via Iceland & Newfoundland. Benton had flown the Atlantic many times, having operated seaplanes over the South Atlantic for 2 years, and been assigned to the Naval Air Station in Brooklyn, NY, and later to a flight squadron at Norfolk, Virginia. At the time of the sighting, he was stationed at the Naval Air Test Center in Maryland, where he qualified for 38 types of military aircraft.

The weather on the night of the sighting was excellent. The moon had set, but visibility was still good. As Benton remembers it, You could make out the horizon clearly but, you could not see the white caps on the water clearly. Seated opposite Benton in the copilots seat was the plane commander, Lieutenant Commander F.K., identified in Keyhoes book as Peter Mooney. Back in the plane, asleep, were two extra crews, one a relief crew for Bentons men, and the other on board as passengers. The aircraft was flying at 10,000', on due course for Newfoundland. Ground speed was over 230 mph. Approximately 3½ hours out of Iceland, at midpoint in the flight, the plane passed over a weather ship, which was on station below, off the coast of Greenland. The ship reported everything normal.

The aircraft was on automatic pilot, standard procedure during clear weather, so both pilots could watch for other aircraft. Lieutenant Commander F.K. & myself were on constant watch for other aircraft. I observed a yellow glow in the distance about 30 to 35 miles away, at about the 1 o'clock position and below the horizon. My impression was that there was a small city ahead, because it was the same glow you get from a group of lights on the surface before you get close enough to pick them out individually. Knowing that we passed the tip of Greenland, my first thought was that we were behind schedule and had drifted north, but remembering that we had passed over the weather ship, I knew this was not the case. I called F.K.'s attention to the glow and asked him what he thought it was. He said that it looked like we were approaching land. I asked our navigator to check his navigation. He did and replied that we were on flight plan and on course. The lights were farther away than we thought because it took us from 8 to 10 minutes to get close enough to where the lights had a pattern, our ground speed was over 3 miles per minute, about 15 or 18 miles away. At that time, due to the circular pattern of lights, I got the impression that possibly two ships were tied up together and that lights were strung between them for either transferring cargo from one to the other or that one was in some kind of trouble.

I asked the navigator to check his ship plot. He replied that there were no ships plotted in this area and that we were not close to the shipping lanes anyway. The radioman also went on the air to the weather ship, which verified that there were no ships in the area. Since it was time for Lieutenant J's crew to relieve us, I had the plane captain awaken them. When Lieutenant J. & Lieutenant M. came up forward, I pointed the lights out to them. Their only comment was that it had to be a ship because it was on the water and we were overtaking it fast. At this time, we were 5 to 7 miles away, it was about 30° to our right, and we had to look down at about a 45° angle. The lights had a definite circular pattern and were bright white. Then, the lights went out. There appeared a yellow halo on the water. It turned to an orange, to a fiery red, and then started movement toward us at a fantastic speed, turning to a blueish red around the perimeter. Due to its high speed, its direction of travel, and its size, it looked as though we were going to be engulfed. I quickly disengaged the automatic pilot and stood by to push the nose of the plane over in hopes that we could pass under it due to the angle it was ascending. The relief crew was standing behind us, everyone began ducking, and a few heads were hit on objects.

It stopped its movement toward us and began moving along with us about 45° off the bow to the right, about 100' or so below us and about 200' to 300' in front of us. It was not in a level position, it was tilted about 25°. It stayed in this position for a minute or so. It appeared to be from 200' to 300' in diameter, translucent or metallic, shaped like a saucer, a purple red fiery ring around the perimeter and a frosted white glow around the entire object. The purple red glow around the perimeter was the same type of glow you get around the commutator of an auto generator when you observe it at night. When the object moved away from us, it made no turns, as though it was backing up about 170° from the direction that it approached us, and was still tilted.

It was only a few seconds before it was out of sight. Speed estimated in excess of 1500 mph. All of our cameras were within reach, but no one was calm enough to think about taking a picture. Most of us were wondering what it was. Our impression was that this was a controlled craft. It was either hovering over the water or sitting on it, then it detected us and came up to investigate. After Lieutenant J's crew had taken over, I proceeded aft and learned that most of the passengers had observed the same thing. Since I was unable to identify the object, I asked Dr. M., Commander U.S. Navy, if he had observed the object. He replied that he had and that he did not look, because it was a flying saucer and he did not believe in such things. I immediately returned to the cockpit and informed the crew to keep quiet about what we observed because it might have been our first sighting of a flying saucer, during those years when you mentioned you had such a sighting, you were believed to be crazy.

Lieutenant J. informed me that it was too late because he had called Gander airfield in Newfoundland to see if the object could be tracked by radar. When we landed at Argentia, Newfoundland, we were met by intelligence officers. The types of questions they asked us were like Henry Ford asking about the Model T. You got the feeling that they were putting words in your mouth. It was obvious that there had been many sightings in the same area, and most of the observers did not let the cat out of the bag openly. When we arrived in the United States, we had to make a full report to Navy Intelligence. I found out a few months later that Gander radar did track the object in excess of 1800 mph. I did not see the reports made by other members aboard the aircraft. I did talk to the Air Force at Wright-Patterson AFB in 1957 but did not look at the report. They said they had it and many similar reports.