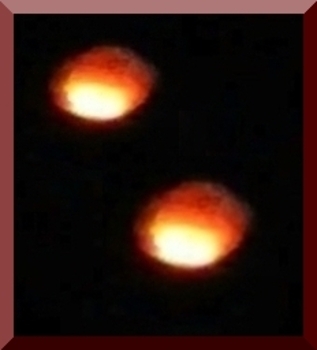 Four employees of Dupont Co., employed on the Savannah River Nuclear Plant near Ellington, SC, saw 4 disk shaped objects approaching the 400 area from the south, disappearing in a northerly direction. At approximately 11:05 p.m., above mentioned employees saw two similar objects approach from south and disappear in northerly direction. At approximately 11:10 p.m. one similar object approached from the northeast and disappeared in southwesterly direction. One more object sighted about 11:15 p.m. traveling from south to north.

Employees described objects as being about 15" in diameter having yellow to gold color. All of these other objects were traveling at high rate of speed at high altitude without any noise. The object which approached the 400 area from the northeast was traveling at altitude so low it had to rise to pass over some tall tanks in the 400 area. This object was also flying at a high rate of speed and noiseless.

Witnesses stated observed objects weaving from left to right, but seemed to hold general course. Also stated due to speed and altitude they were only visible for few seconds.

Savannah office is not actively conducting investigation in this matter and is furnishing this info to bureau for whatever action they deem advisable.

Of course this is in the FBI file, probably the most interesting sighting FBI report in 1952 before the big flap and the Newhouse film. One would think that the AEC or some organization would have pursued this. The FBI was following directive from Hoover when it took the report and then did not investigate.

However, the fact that the FBI didn't pursue it may indicate that the unstated opinion was that the objects were flying saucers of some sort. Had the objects looked like model airplanes the FBI might well have decided to investigate to find out who was flying model planes over a vital installation.