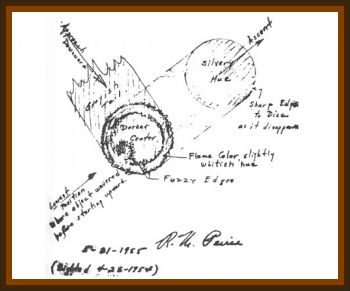 The time of day was between 3:00 p.m. & 4:00 p.m., and the sky was clear overhead. I was standing at the rear of the local high school building talking with friends, we all heard a very loud deep roar as of many motors, which accelerated very rapidly and then faded out just as rapidly.

The direction of the sound was from the sky and I instinctively turned my head and eyes upward. It just happened that the line of my vision was such that my eyes were almost instantly focused on the object, which was East, perhaps a little to the SE, from where I was standing.

It was up high overhead, and from the angle at which I was looking up, about 60°, with the Earth, I would say that the object could have been out over the ocean as we are in about 4 miles from the coast.

The object as I first saw it appeared as a flaming ring. The color was a little on the whitish tone but also had some suggestion of the orange/yellow of the common flame of burning wood, say.

At the lower left quadrant of the ring there appeared a small, bright disk tangent with the ring, same color as the ring. The center of the remainder of the ring appeared dark.

The object was headed Earthward, not quite in a direct line toward me, but sort of downward and a little to the right. This direction was indicated by a short, grayish trail upward to the left.

Then the object seemed to waver and skid around for just a few seconds, apparently reversing its direction, because it next went upward and to the right, disappearing from sight very quickly.

As it disappeared the appearance changed from that of a ring and internal concentric disk, to a solid silvery colored disk.

The sound came and went synonymously with the object’s appearance and disappearance. The size appeared slightly smaller than a full Moon would appear high in the sky… The time of observation was short, say 20 seconds, but long enough to get a good clear view of what was visible… My daughter heard the roar from inside our home, and 3 other people called me, after seeing the newspaper article, to tell me they had heard the unusual sound from the sky at the same time I had heard it…

It appeared as though the object were traveling Earthward at a terrific speed, and then as though a tremendous force were applied to arrest the Earthward direction and send the object back upward, and consequently it went rapidly out of sight and out of hearing distance.

What the object was, where it came from, and where it went, are all a complete mystery to me but the sighting was as clear as a picture on a wall.