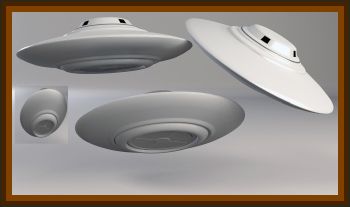 It was the summer of 1956 and I lived in the city of New Brunswick, New Jersey. I was 8 years old. It was a sunny day and sometime in late afternoon, or early evening, our phone rang.

It was a friend of my father’s and he told us to go up to the roof of our building because there were UFOs flying around.

Dad and I rushed upstairs to the roof of the building and facing downtown New Brunswick, we could see very clearly, about 4 flying saucers. They were roughly about 500' to 700' up and were clearly playing, in aviation circles, it is what is called dogfighting.

They were chasing each other and darting in hard right angles and various other tight angles that our planes were incapable of doing. However, they stayed within an imaginary box, so to speak.

My father’s friend showed up within 5 minutes carrying a telescope. He quickly set it up and we all had a turn viewing them through the scope. I was amazed just to see them, in the first place, but seeing them through a telescope, really up close and personal, was truly something else.

The ships were silver but not shiny like the bright side of aluminum foil, more like the reverse side, like a brushed metal texture but lighter in color. The metal, in the bright sunlight, had a bluish tinge to it reflecting the Sun’s light off of it.

They were what I would call the traditional cup and saucer shapes. 2 plates with the top one inverted over the bottom and an inverted cup on top of the two plates. All 4 ships were of the same shape.

As I watched one of them through the telescope, I could only watch one because the ships weren’t far away to begin with.

Looking at it through the telescope brought it so close that I really couldn’t capture an entire ship in my view, just a section of a ship, I noticed it was radiating colors.

And then, as if on cue, they streaked out of sight. Within 2-3 seconds, they were gone.

The following day, in the local New Brunswick newspaper, The Home News, there was a picture of those UFOs right on the front page.