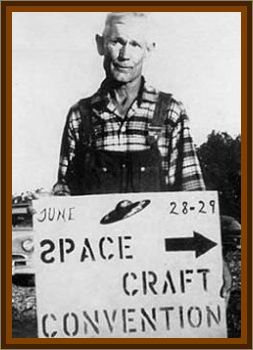 Buck Nelson (1894 - 1982) was a farmer who claimed to have had an encounter with an unidentified flying object and its humanoid crew in 1954 while living in Missouri. His account states that he saw three flying saucers over his farmhouse; he took photographs and attempted to signal with a flashlight, but was attacked by a beam of light. However, he goes on to claim that, after dusk fell, three "friendly spacemen", similar to humans and accompanied by a gigantic dog, "Bo", visited him and spent some time talking with him.

Nelson further stated that two of the aliens were named Bucky and Bob, and their main message concerned the "Twelve Laws of God", derived from the Ten Commandments. He claimed to have been taken on trips to the Moon, Mars and Venus. Upon their return to Earth, he was given the dog, Bo, as a gift. It was claimed Bo was hairless, due to cosmic ray exposure, and weighed almost 400 pounds, but was too shy to be publicly exhibited.

In 1956, Nelson published a pamphlet, My Trip to Mars, the Moon and Venus, and became something of a celebrity in the Ozarks. He held a successful annual Spacecraft Convention near his farm for about a decade, where he sold his pamphlet, and pay envelopes containing a small amounts of black hair, which he claimed had fallen off Bo.

Nelson died in 1982. An unconfirmed account states he spent his declining years with relatives in California. Although his story achieved a degree of popularity, it was never widely believed, and interest faded as the contactee era came to an end.