Squadron Of Disks Over Nuclear Facility 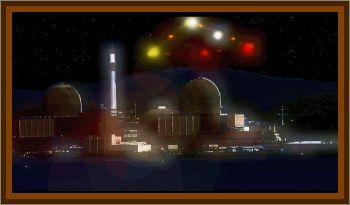 A flight of flying saucers near the Nevada test site, where important new atomic tests are being made, has been reported by five men at Nellis Air Force base, near Las Vegas.

The men said they counted 18 circular, dull white objects streaking across the sky north of the air base. They were flying on an easterly course which apparently had taken them directly over or very close to the atomic weapons proving ground.

The objects, which the men declared definitely were neither planes nor observation balloons, flew in an irregular formation. One of them was off to the right, moving in a zig-zag motion.

The men estimated they were 40,000' feet high and traveling at a speed of at least 1,200 miles an hour. They left no smoke or vapor trails.

Van Houten saw them first and called the attention of the other men to them. The objects were in sight for about half a minute before they disappeared to the east.