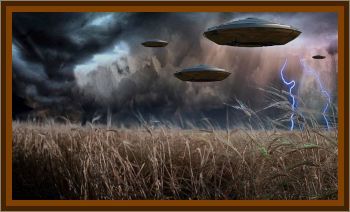 In all fairness, I'm not certain if the following story is a Spook Light, a UFO, or something different. I couldn't find much on it, as to size or color or anything. I found it interesting, so I'm listing it only as a sighting. If anyone would have more information about it, I would be very appreciative. Here is the article:

On a calm evening in 2004 a strange occurrence happened on our quiet farm on this stretch of Highway 61. The night was quiet, save for the sounds of crickets and frogs in the properties many ponds. We were all simply enjoying the evening, drinking tea and watching the local weather channel. One of my siblings had been puttering around the livingroom when our parents began talking about some strange thing happening outside. Of course, as curious as teenagers become, we all proceeded to the upstairs sunroom where we all could see the surrounding field.

Here is where things began to become a little more eerie. As we sat in the darkened upstairs sunroom we were stunned to be seeing what was happening outside.

First let me explain to you the surrounding valley. The trees in the field border are approximately 40 feet tall, with many miles of trees behind the first row. There are mountains in to the left and right, with Highway 61 cutting through the right and following the western mountain range until it reaches the Canadian/American Border.

Where this phenomenon occurred there is approx. 1½ miles of dense forest before the highway begins to bend left to the border itself. It was in the thick of summer where the trees are full of foliage and you cannot even see through the trees. As we were watching we viewed a large light from a distance of about 75', maybe more, hovering about ¾ of the way up the treeline. The light moved from left to the right of the treeline only to stop and go back to the left. This occurred about 5 times until it then sped to the left and disappeared into the gully where a river ran. We all stayed quiet and a couple of us made comments about the light. We were about to go back to the livingroom when my sibling then exclaimed Look!...It's back! It's back!. My mother hushed us as we again watched this light skirt through the treetops.

We were very uneasy at this point. More so when the light then turned into two lights. These two then began a strange sort of dance in the treetops. First the original one would float through to the right of the treeline with the second, then they would move so as the second would be below the first and then continue to float through to the left. They continued to change places and going back and forth for about 15 minutes. Needless to say my family and I were captivated by the display, but terrified at the same time. What were these lights? What were they doing?

It wasn't until our dogs had noticed the lights too that they began barking and becoming agitated. The lights disappeared by zooming at top speed to the left of the field towards the eastern valley wall, down to the gully. My father is a very sane and hardworking man. A very old fashioned man. He immediately tried to rationalize what we had seen, speculating that it was ..the moon. and that ..it was just an interesting thing.

For years I have never been able to justify what it was that we saw that night. Taking a walk along the highway the following week I had drawn the conclusion that there is NO way that it could have been headlights of cars on the highway, ..the moon" as my father has rationalized it (The moon was clearly in the sky that night and it was NOT in the treeline.) And it certainly could not have been flashlights or anything of that matter. It was a pure, unadulterated event that I cannot explain to this day.

I have heard stories of Willow Wisps, that are common in swamp settings, which we really did not have any on the property but there are some in the community. I have also heard of other things like aliens or orbs. I don't have an explanation. I don't think this really fits into anything I have looked into.... All I do know is that is was a beautiful sight. The lights were solid. The movements were graceful and wonderfully coordinated. I don't know what could successfully complete a feat like this, especially through the treetops of 40' trees in a thick forest treeline. I really do not know. I felt compelled to share this experience as it really is an oddity. It's something that will stay with me and my family for years to come.