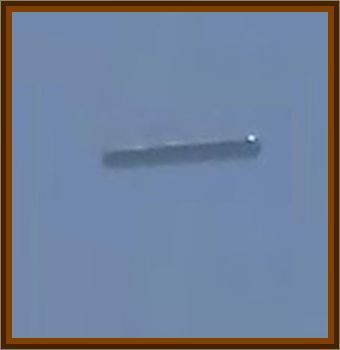 This is an incident was witnessed by a 6 year old boy. Who lived at Grand Island, NE. The neighborhood was fairly new at the time and compared to today, was on the fringes of several farms and semi rural. The northern major road running east/west was Capitol Ave. and one block south was State St. Young kids in the neighborhood attended West Lawn Elementary, not the new one, but rather the old one at State St. & Broadwell. There were not many trees back then as the neighborhood was very new. There were even fewer houses. So the view northward was very open and clear all the way up to Capitol.

On Saturday, August 8, 1964 a lot of the neighborhood kids and I were out playing in the street. It was typical stuff, riding bikes, playing army, simply running all over the place. A lot of parents were out working on their yards, washing their cars, etc. Just a typical hot and very humid day in Central Nebraska.

An object drifted over the sky, transiting NW to SE on its flight path. It got everyone’s attention pretty quick. It was huge. Far bigger than a modern airship or similar type of craft. It was slightly overcast that day, but you could see it clearly. It was black, shaped like an oval cylinder. It had a red line going around the middle of it that was lit up and appeared almost electrical in nature. I remember smelling ozone. Like you do when you short a wire out or with lightning. At the bottom and slightly to the side was some type of opening or even possibly a light source that was intense blue-white. It was not a bean or anything, at least it did not appear that way. It makes me think it was an opening as it appeared and then disappeared a couple of times. I do not recall anything coming out of it. But there was a strange sound, almost like ringing in your ears, but it was a really high frequency. It didn’t hurt or anything, but it was there. People were talking about it and my Dad, who now cannot remember it happening, said it was probably some kind of USAF aircraft.

One of the neighbors, my friends grandfather thought it was probably something the Russians had cooked up to scare people with. The odd thing in this was the longer it hovered there, the more quiet everyone got and soon stopped talking altogether. They just stared at it. Even my friend "D" and another friend, a girl named "P" stopped talking and just stared at it. No one spoke, no one moved. I think at some point that the same happened to me. I have no recollection of time between the incident and Sunday dinner, which was the next day. I do not know what happened in that time period, as the next day we were getting in my Dad’s Valiant and heading over to my grandmother’s house.

I am guessing here, but I believe it may have been as large as a ¼ mile in length. It was simply massive. Most of the kids there that day are haunted by this incident. They know it happened, but none of the adults remember anything at all. It is like their memories were erased. This has haunted me for 50 years. I remember it as clear as daylight.