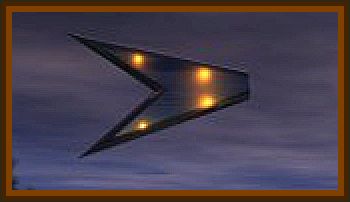 As I was being driven home with my family at approximately 11:30 p.m. after a show in the school where my mother worked as vice principal, I took to my usual habit of staring blankly out the window.

In this part of Dublin it is very rural and it was dark at that time with none of the orange streetlight pollution I’m used to. Approximately 15 to 20 minutes into the journey while driving along the backroads I noticed what looked like a large wedge shaped object flying what looked like very low, and maintaining pace with the car, maybe a mile or two away. I dismissed this at the time as a plane, although it was black and had no lights, and could only barely be made out against the sky, although I should point out that this lower part of the sky was a bit brighter. However that was not the main incident. A few minutes after I had been observing this craft, I noticed a triangle shape which appeared in the sky, stationary. It was much higher up than the other craft. My late dad and brother noticed this as well.

It was an equilateral triangle outline, with the 3 colors at each end, red on top, white/silver on the left, and a sort of blue/green color on the right end. These colors were in the form of solid bars which linked up to form a triangle of color, it is possible that the 3 were the lights of a black craft but I could not discern this, though the skies were clear at the time. The colors did not flicker, change shape, or become brighter or dimmer, they just remained constant as a triangle shape. This shape held the same position in the sky for approximately 5 seconds, though it’s difficult to tell exactly, it could have been 3 to 10 seconds. When this occured I sat there silently and after it happened noticed the other craft was still flying low to the ground.

My dad exclaimed when he saw it, and got my mam to pull the car over at the next chance, but it was gone. My dad then noticed the second object, the first I had noticed, the wedge-shaped one, when we were driving home, saying that there was another one, and I continued to monitor it until it passed behind some trees in the distance and couldn’t be seen any longer, and then it was no longer there. I dismissed the first sighting as a plane as it appeared somewhat plane shaped although there was no sound from it or lighting and it was approximately 3000' to 4500' away, the weird thing was it seemed to be keeping exact pace with the car, and it was quite a remote place with not many other cars around.

The second sighting, the triangle shape, I considered as unknown, possibly the lights of some flying vehicle. I discovered later that my brother had seen the triangle as well. I could not guess how far away the triangle was as I had no reference to other nearby objects such as trees as I did with the low flying craft. However, the triangle shape itself was about half way up the sky, probably in an east direction from the car, as Irish passenger seats are on the left, and the journey was north south.

Its 3 points when compared to the moon would not touch the ring of the moon but would come quite close, as a comparison of its size, though the moon was not visible in that direction.