While In The Navy... 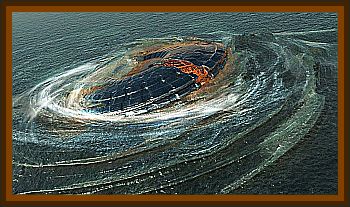 While in the navy, me and another guy were military police on a navy ship standing watch on the Midnight to 7:00 a.m. shift.

We were at the top level on the ship, and my friend said:

Look at that object.

All at once a UFO looked to lose control, headed toward the ocean; then out of nowhere. A second UFO looked like it landed on top of the first one, After that it looked like some power source, maybe electrical, was bringing both craft toward each other.

The two craft started to go up, as if toward the moon. The colors were a white/blue color, with roundish windows about four total maybe 23' to 35' wide and same long, The movement up was like slow motion.